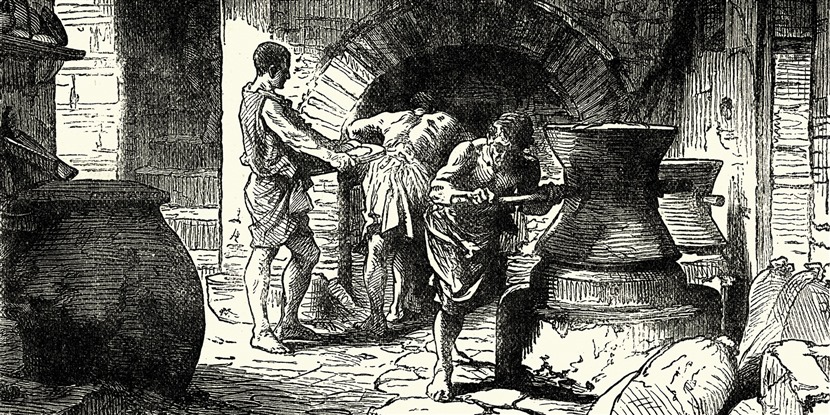 As quarantine drags on, a lot of people have turned to bread making. Seriously, do a quick search for “sourdough starter” on Twitter or Instagram—people are getting weird about their bread.

Water, flour, and time. That’s all you need to make bread, though humans have added flourishes through history. Bread making is an old art. How old? You might think that it started with the agricultural revolution, but archaeologists have evidence that humans were making bread thousands of years before they settled down in villages and started farming.

Some hunter-gatherers loved bread, even if they didn’t knead it. Our earliest evidence of bread making comes from the Natufian culture, in what is today Jordan. There, archaeologists found the charred remains of 14,000-year-old flatbread in a Natufian firepit. This wasn’t supermarket bread. It had no yeast, it wasn’t kneaded, and it was made with flour from wild einkorn and club-rush tubers. Yet, it was definitely bread. We have evidence of the existence of bread ovens over 8,000 years ago in Çatalhöyük, Turkey, and there’s also evidence that humans in Eastern Europe were grinding flour over 30,000 years ago. 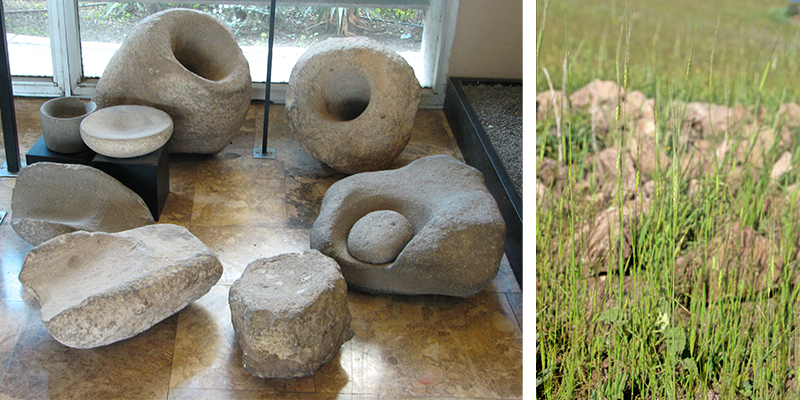 Baking bread takes a lot of work—especially if you can’t buy flour at the store. You have to collect, husk, and grind grains with stones. Given this process, hunter-gathers probably only ate bread on special occasions. Love of bread might have driven humans to farming as they sought more grain to make more bread. Some historians argue that beer, not bread, convinced people that they needed more grains. The earliest beer-brewing evidence also comes from the Natufians, who probably discovered it by accident when uneaten boiled grains fermented. Whichever came first, the histories of bread and beer are intertwined. Ancient Egyptians baked a special kind of bread that they used to brew beer. Today, you can buy yeast in a store, but before the mid-nineteenth century, bakers visited their local brewery to get their yeast.

Bread is common in every region of the world today, but that wasn’t always the case. Bread making originated in the Fertile Crescent—the region stretching from Egypt to Anatolia and Mesopotamia—where wheat and barley grew in abundance. In regions like sub-Saharan Africa, East Asia, and Southeast Asia, where rice, millet, and sorghum were more common, bread didn’t become a staple food until later. Trade and conquest brought bread to new places. Societies in North Africa, Arabia, Europe, Central Asia, and the Indus River Valley produced their own varieties of bread. Mesoamerican societies independently developed bread in the form of maize tortillas. East African and South Asian cultures developed flatbreads, and steamed buns became common in wheat-producing regions of northern China. European colonialism spread European-style loaf bread to new places. Today, some of the best French bread in Australia is made by Vietnamese immigrants who fled Vietnam as refugees in the 1980s. French colonialism in Southeast Asia helped make variations on petit pain (rolls) popular there. 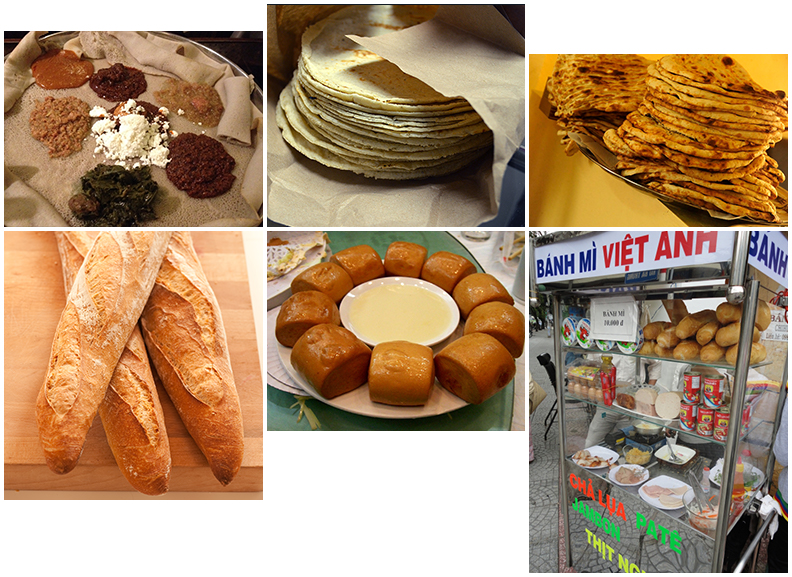 Bread means many things to many people. Each of the foods in these pictures can be classified as a variety of bread. From top-left: Ethiopian injera functions as bread, utensil, and plate; Mexican maize tortillas; varieties of naan are popular in Central and South Asia; French baguettes; Chinese deep-fried mantou buns; and a bánh mì stand in Ho Chi Minh City, Vietnam. Bánh mì is the Vietnamese word for bread, but it also refers to a type of sandwich made using a French-style baguette. Ethiopian injera, by Shiefrallo, CC BY-SA 4.0. Mexican maize tortillas by ProtoplasmaKid, CC BY-SA 3.0. Credits: Naan bread by Christine A. Darius,  public domain. Baguettes by jules, CC BY 2.0. Mantou buns by Pfctdayelise, CC BY-SA 2.5. Bánh mì stand by Matt Stabile, CC BY 2.0.

In the mid-twentieth century, new chemical and industrial techniques allowed shelf-stable bread to be mass produced. As American culture spread, so did American breads like the hamburger roll, common now in McDonald’s around the world. However, according to Nicky Giusto, a fourth-generation miller and baker at Central Milling, the COVID-19 pandemic has accelerated a recent trend away from highly processed bread. Many consumers are drawn to simpler, older sorts of bread. According to Giusto, “the future of bread lies in its past.” The current interest in bread making highlights this shift in consumer taste as people seek out older recipes and methods.

Why have people turned to this ancient practice during these times of quarantine? There are a lot of possible answers. The effort and time involved in kneading and baking bread can help relieve stress. It’s nice to have fresh bread, and it’s something to do when you’re bored. Every day we face the little uncertainties—such as going to the grocery store and seeing that your favorite loaf of bread is out of stock. Learning how to make bread can help some people feel more secure and provide a sense of control in a time when that is sorely lacking. The upward trend in bread making might also be fueled by herd mentality—everyone else is jumping off the sourdough bridge, maybe you should too. 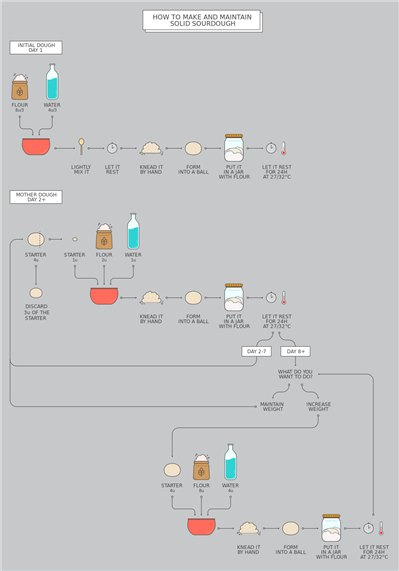 A sourdough process chart. How to make yeast using only flour, water, and time. Be warned: It’s harder than it looks. Maintaining a sourdough starter is a little like caring for a new puppy…a really oozy, temperamental puppy. By Chiara Bonsignore, CC BY-SA 4.0. (full-size image)

A lot of industries have been devastated by COVID-19. The bread industry and the industries that support bread making are not among those. Thanks to the renewed interest in bread making, wheat farmers, flour millers, and bakers are finding their products in high demand. Like the makers of toilet paper, the bread industry has seen major shifts in its supply chain. The pandemic has shifted and increased consumer demand for flour and yeast, especially toward retail stores. Yet, the capacity of flour mills has stayed the same—or decreased due to the constraints of working during a pandemic. A lot of people are baking bread. And a lot of people are failing at baking bread.

Don’t let the stereotype of the crusty academic fool you: Historians are happy to offer some baking guidance. Sumerian cuneiform tablets contained ancient recipes and inventories. Egyptian hieroglyphs recorded instructions for baking bread in the afterlife. One amateur baker and Egyptologist has even experimented with reproducing 4,500-year-old bread using dormant yeast crusted on ancient Egyptian ceramics. But for a really hot take on breadmaking, we need to travel to the Roman city of Pompeii.

You think the current disaster sucks? In 79 CE, an enslaved man in the Roman city of Pompeii had just finished the laborious process of making bread for those he served, when a nearby volcano overbaked the bread—and the man. The heat preserved the bread, which bears the stamp of the baker: “Property of Celer, Slave of Q. Granius Verus.” In 1930, archaeologists pulled it from the oven, 1,851 years overdone. Using that loaf, the British Museum and chef Giorgio Locatelli collaborated to re-create the recipe. If you’re interested in learning to bake like a Roman, check out the museum’s YouTube tutorial, or read about the recipe here… just be sure to scope out your local volcano before you commit. 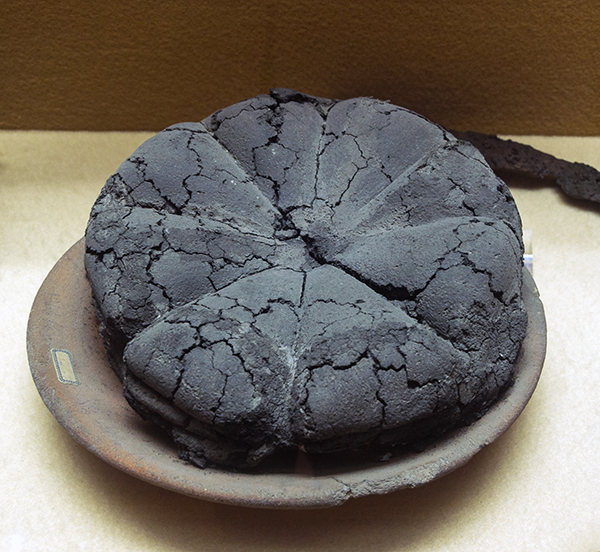 Worried about baking a 2,000-year-old loaf? No problem. If you can’t rise to the occasion, Nicky Giusto recommends  “Some-Knead Bread” for beginners. The more adventurous might check out “Vollkorn Dinklebröt.” Of course, in some areas it’s tough to get yeast right now. Or maybe you’re worried that even beginner yeast breads are too complicated. Well, humans have been making flatbreads for at least 14,000 years. If ancient hunter-gatherers—without electricity, toilet paper, or YouTube tutorials—figured it out, you can too. All you need is flour, water, and time…and a stove (butter or some other fat, salt, and baking powder also help). Just dump a cup of flour in a bowl and add water. Mix until you have a semi-firm dough. Let the dough sit for half an hour, then form it into several small balls before flattening and cooking them in a frying pan. Like ancient hunter-gatherers, you’ll have to experiment to get it right. Or better yet, ask a relative, friend, or teacher for help with their favorite recipe. It might help both of you relieve your anxiety and have some fun.

Symons, Michael. A History of Cooks and Cooking. Urbana: University of Illinois Press, 2004.