Foraging or farming? Two visual answers to an age-old question. 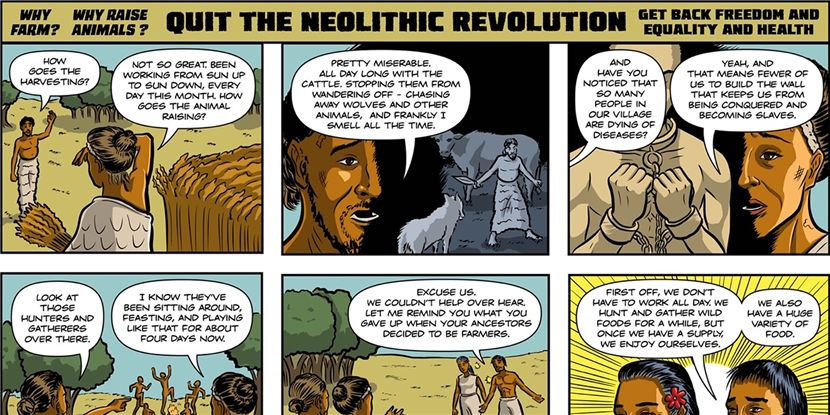 It used to be such a simple story. Humans started out as dirty, primitive, cave people. Then they learned how to use tools. Stones to hunt and dig and cut with. Fire to cook with, making edible the inedible. Pottery to store provisions in. But food was still sometimes scarce. So they innovated. They found ways to grow their food, and keep and domesticate animals for their milk and meat. Food became plentiful, and life was better. It was the Neolithic Revolution, evidenced by new tools for food production—hoes and plows and scythes. It began in a few places, and spread around the world. Wherever it spread, civilization followed. The end.

No longer a simple story

The only problem with the story is that it might be inaccurate, in many ways. In the Big History Project and the World History Project courses, we explore the evidence that supports this narrative and the evidence that challenges it. We look at societies that chose not to become farmers, but rather to remain hunters and gatherers. We see that in many parts of the world the transition to farming or herding took a long time. We study communities where farming seems to have been something that was forced on people, not chosen. Finally, we see evidence that in some places, the transition to farming created societies in which people were less equal, and which made people less healthy.

Students are often surprised by this evidence because it seems obvious that farming made us wealthier and increased our life expectancy. Their skepticism isn’t illogical. After all, if they look at the world today, almost everyone exclusively eats food produced by farmers and ranchers.  Few foraging societies are left and students are told that those that remain are poor, even primitive. But are they? Increasingly, we see foraging societies as having values that maybe we should embrace. They seem at least as happy as  people living in industrialized societies. They aren’t more violent. In fact, they have rich communal lives many of us yearn for. They aren’t even really less healthy—they may get more parasites, but they suffer much lower rates of heart attacks and stroke.

So, as they evaluate the world around them, it’s relevant for students to raise this historical question: Was the transition to farming and pastoralism a good idea? It’s a usable question, one for which we have lots of evidence for students to work with, like this article or this video, or this activity, all from the Origins course of the World History Project. Or, if you’re teaching BHP, there’s this whole lesson.

Comics are the tool!

The question of whether or not the Neolithic Revolution was a good idea is a great one to teach. I know I'm going to teach it this year, even though my classes are online. I’ll be OK, because I have a secret weapon. And good news: I’m willing to share it with you. My game-changer is a pair of brilliant one-page comics. The first, a classic, was created for the Science Museum of Minnesota by acclaimed artist David Steinlicht. This comic lists all the great virtues of domesticating plants and animals in one fun, easy-to-digest page. 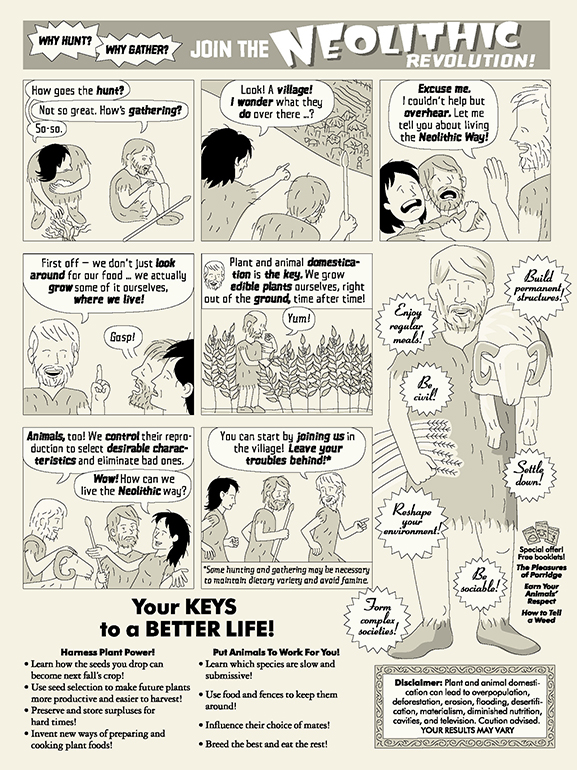 Are you convinced? Are you going to join the Neolithic Revolution? Well, first maybe you should take a look at a second comic, written by historian Bob Bain and produced for the World History Project by one of my favorite designers, Peter Quach: 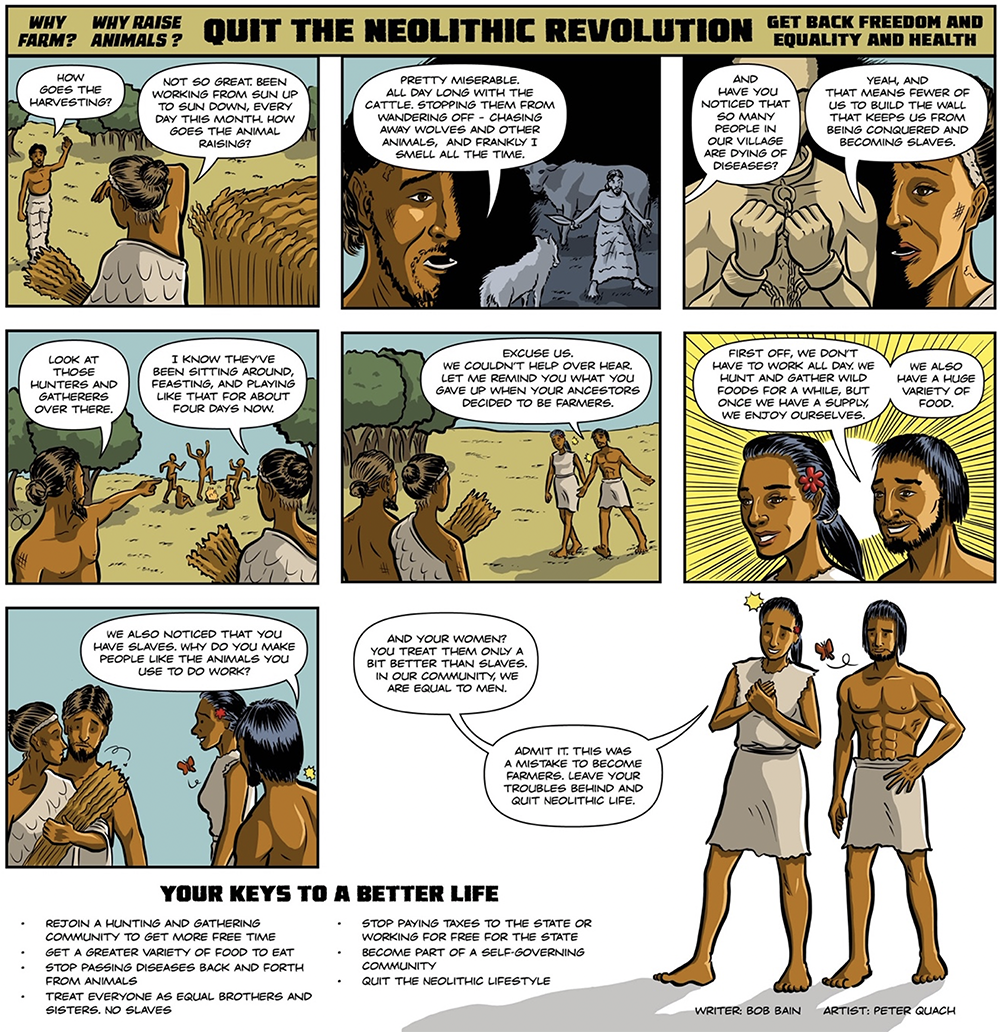 Now you’re not so sure. Maybe it would have been better to have remained a forager. Am I right?

There are all kinds of ways you can use these two great little comics to help students. You can use them first to introduce the topic of whether the transition to farming was a good idea. You might ask students whether they would have chosen to become farmers or to remain foragers. Or, students might read some of the other resources we provide first, and you could then use these to remind them of some of the key arguments right before you assign an essay or assessment. You might ask students to reflect on how these two perspectives help them to question their assumptions about the world today—are they really better off than the world’s remaining foragers?

You can even use the two comics to help students advance their critical reading skills. Students might first try to identify the key arguments in each comic. Ask them to read for those arguments in both the texts and the images. How does Steinlicht use pictures to show the farmers as better off than the foragers? How does Quach use design elements like butterflies and light bursts to emphasize the advantages of the foraging life?

The two comics go well with all kinds of pedagogical approaches. Set up groups to do deep reads. Do a compare and contrast exercise. Prepare and hold a debate. Discuss why and how our explanations have shifted over time, as science and society’s values have changed. In the end, these comics will help students acquire and retain this lesson content, and maybe to question their own assumptions of the world in the process.

And guess what? We are giving you comics galore. We have recently completed about thirty one-page graphic biographies for the Origins and 1750 courses. Find them in the final lesson of every era (except Era 1) and unit! Look for Native American historian and activist LaDonna Brave Bull Allard,  Japanese industrialist Iwasaki Yatoro, Filipino president Manuel Quezon, Chinese explorer Du Huan, West African queen mother Yaa Asantewaa, and many more.  And we’re working on even more. So stay tuned for Aztec poet Macuilxochitzin, Afro-Japanese samurai Yasuke and Polynesian explorer Kupe!

About the author: Trevor Getz is professor of African and world history at San Francisco State University. He has written or edited 11 books, including the award-winning graphic history Abina and the Important Men, and coproduced several prize-winning documentaries. He is also the author of A Primer for Teaching African History, which explores questions about how we should teach the history of Africa in high school and university classes.

If you enjoyed this post, there's a lot more where that came from! Register for an OER Project account to join an active community of fellow educators, and access our full courses free of charge!