Group effort or solo standout, Halloween is a great time to show off your playful side 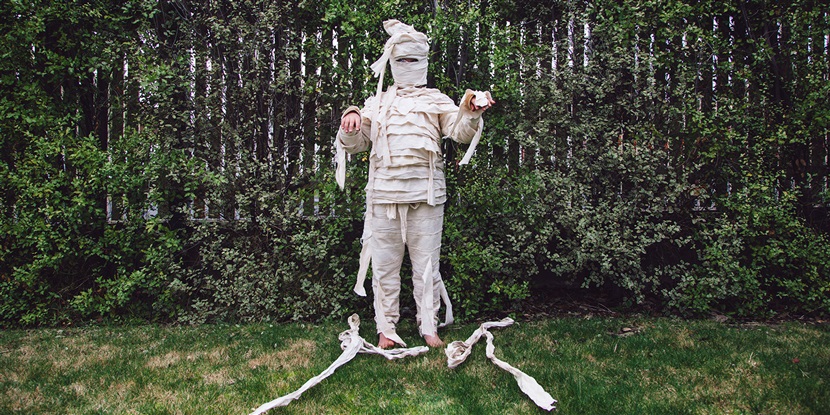 One of the coolest things about being a teacher is that you always have the chance to get your nerd on and dress up for Halloween. To get into the spirit this year, we asked OER Project teachers to show off some of their favorite costumes from years past. Perhaps not surprisingly, teacher costumes feature a lot fewer vampires and ghosts and a lot more literary references and wordplay-as-sight-gags. Go figure.

Group costumes are always fun, and of course we all have a bit more courage to participate when our friends are on board. But when you're a teacher, having different classrooms means you tend to get separated from your theme team. One year that left Anne Koschmider as a lonely rock, looking for her paper and scissors. Not to mention Curt Greeley's Popeye, whose Olive was in another building (#wheresbluto). But wait, there's s'more! Or at least that was Anne's explanation of her costume: she was a graham cracker, not a random pegboard. Anne and Curt have earned the You Complete Me award, and we applaud their advocacy of teamwork!

We saw two Harry Potter group costumes with Muggle teachers mugging as Hogwarts faculty. One features our own Kathy Hays as the imperious Minerva McGonagall, and another showcases the Mount Si High School’s duo Lynsey Woldendorp and Ben Tomlisson as McGonagall and Alastor "Mad-Eye" Moody. Thanks Kathy and Lynsey for sharing these pics—like Cedric and Harry, you'll have to share the Best Literary Costume Victory Goblet of Fire. We're sure nothing will go wrong if you just grab it at the same time. 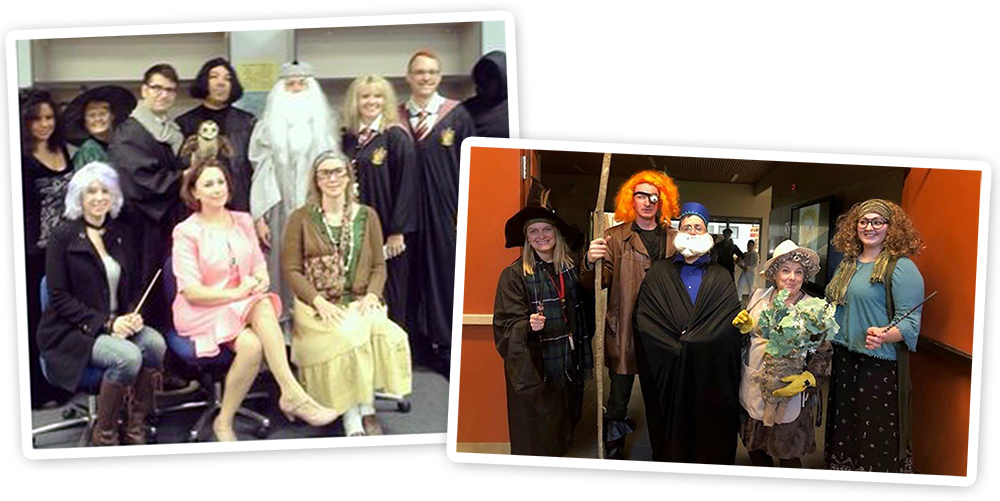 Now we did have a couple of traditional solo costumes to inspire those of you who plan to forgo the group project and make a diva entrance at school this year. Here we finally got a bit of blood and gore—particularly with Todd Nussen's zombie baseballer costume celebrating the Mets for their brief rise from the dead in the 2015 World Series. But we also got the promise of gore with Hayden Brown's pre-duel medieval knight's garb, which he sweated through on a very hot day in Western Australia. Todd and Hayden, you'll share the award for Best Solo Artist, but, you know, as a team. 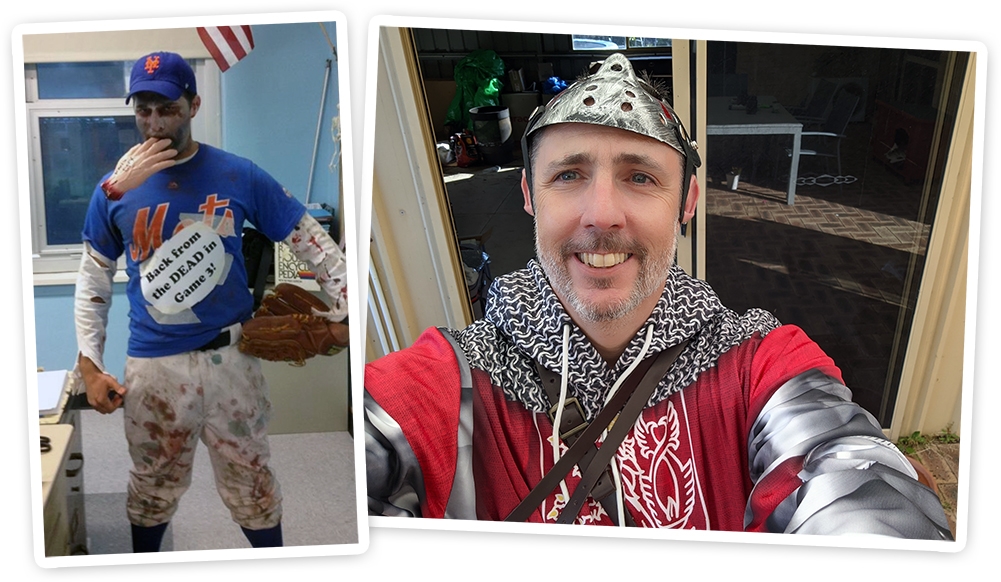 And finally, we'd like to salute Bryan Dibble for his historically impressive Halloween spirit. Bryan has an annual tradition with his students that merges Veterans Day and Halloween, allowing them to honor members of our country's military and rock every style of camo you can think of. Way to get the kids on board, Bryan! You get the Saving Private Bryan award for best student engagement. 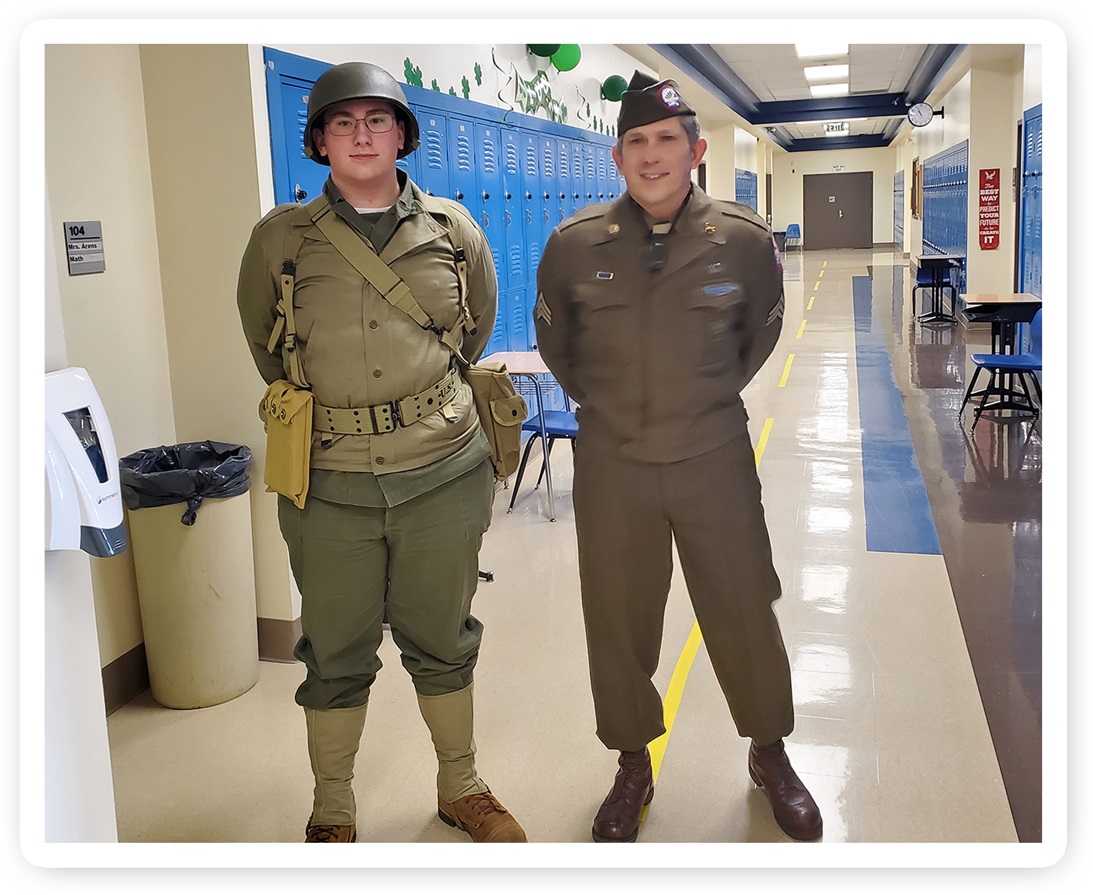 We caught up with Bryan when he was crouched in his foxhole and did a brief interview:

OER Project: How long have you been teaching?

Bryan Dibble: I have been at it for 27 years. Three districts, four buildings, and eight grade levels. I see retirement in the future, but the fun of the classroom is still in the way of hanging it up.

BD: My kids have figured me out—I wear a different military impression each year. Even if it's subtle, just a small detail change, there are history nuts here that figure it out. I have had a few kids over the years wear their father's uniform, and that is super cool. Each kid that makes the commitment to wear a uniform for Veterans Day gets to [borrow a uniform from my collection] before Halloween too. I try to get them to sign up early for that perk! That also means more time for these kids to discover some connections with their own family history and that particular impression. Just before [the pandemic] hit, a young man who was wearing the Korean War uniform learned that one of his grandfathers was in the Korean War. He never knew that, and the topic might have never come up otherwise.

OP: What's your go-to candy to distribute at Halloween?

BD: If I had my way, it would be full rolls of Necco Wafers. Just because.

OP: Do you teach any historical lessons that incorporate Halloween?

BD: That is interesting, I've never even thought of a Halloween lesson. Definitely not against the idea, but we just keep with the main curriculum. I have a unique achievement sticker system in my class, and always make a cool one for Halloween. So I get a lot more students dressed up than usual. Don't miss Dibble's stickers for Spirit Week and special holidays, that's the rule.

OP: What advice do you have for teachers who are experiencing their first Halloween as educators?

BD: GO ALL OUT. If there is a dress-up day, do it bold, big, and unabashed. Get fellow staff in on it too. As someone very famous once said, "Life moves pretty fast. If you don't stop and look around once in a while, you could miss it."

OP: Words to live by for sure.

OP: Is there anything else you want to share with teachers at this time?

BD: There are way more personal interactions, moments for encouragement, and connections to make it this business than classwork, lesson plans, and tests. Yes, keep up the rigor, but make sure you are building great relationships with students and colleagues. That's the stuff that matters the most.