Happy Day of His Elective Majesty 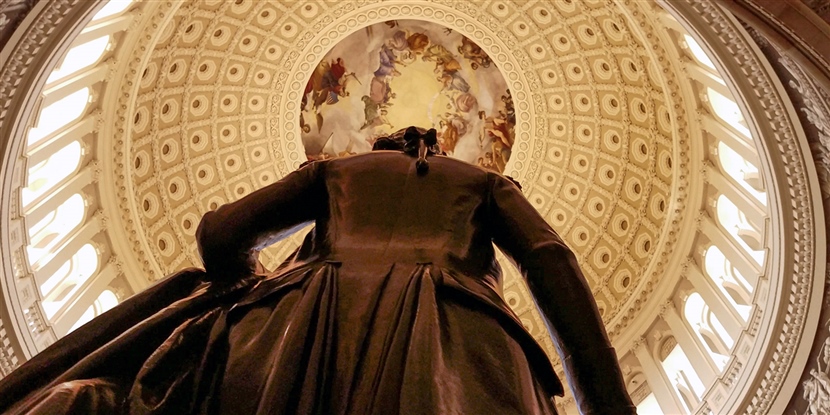 Welcome to Presidents Day, an annual holiday on the American calendar that reminds us not only of the founding of our republic, but also the role and position of the American president, from George Washington to Joe Biden. This annual red-letter day, like the swearing-in of the president at a formal inauguration ceremony every four years, is meant to condition us to seeing the presidency as solid, stable, and permanent.

But in his first year as president, George Washington himself was terribly afraid that he was going to crash the system. He worried not only about the formal aspects of his job, but also the questions of decorum: How does a president dress? Where does a president receive guests? What do you call the president? With whom does a president socialize? How is a president to be treated? At the time, European rulers were surrounded by formal rules and recognitions. For example, in 1748, the English King George II’s birthday had been made an official holiday, to be marked alongside the other official events of the year—the holy days that marked the lives of saints or other religious events.

Both Washington and Congress quickly rejected the idea of formally marking the president’s birthday, but they still struggled with issues like how one addresses a president. John Adams famously suggested several possibilities, including “His Elective Majesty,” “His Mightiness,” and (my favorite) “His Highness, the President of the United States of America and the Protector of Their Liberties.”

Part of the struggle surrounding these questions was simply a disagreement over rituals. In the early years of the Republic, some of the founding fathers wanted to do away with all the trappings of royalty in favor of something much more egalitarian. Thomas Jefferson, for example, walked to his inauguration in Congress, delivered a paragraph-long address, and then walked back to the White House, alone.[1] Many legislators also wanted to forbid what they saw as highfalutin rituals of state power. There was no big state holiday, even on July 4. Certainly, there was no room for a state-sanctioned celebration of a president’s birthday, which (it was feared) would make him look like a king.

Now, I don’t want to make this point too vigorously.[2] The early American Republic did have lots of rituals, and some political figures saw them as a way to unite the American people, or at least those who could vote. Slowly, across the late eighteenth and early nineteenth centuries, a calendar of semiformal holidays did emerge. This calendar did include Washington’s Birthday, along with the date of the ratification of the Constitution and the end of the slave trade. These days were largely celebrated as a way for political parties to make arguments about their ideals to their constituents. Holidays, after all, could be made to represent values, and they reminded voters about popular heroes who were associated with a political party.

After the Civil War

In general, however, holidays and their associated rituals weren’t a huge part of American politics until after the American Civil War. In the wake of that bloody, divisive conflict, President Andrew Johnson and others recognized the need for holidays and other symbols to bind the country together again, and to create a sort of unity for a broken nation. And so they turned to the symbols and practices of the Old World, to those things that represented monarchy and religion, both Christian and “ancient,” before the American Revolution. 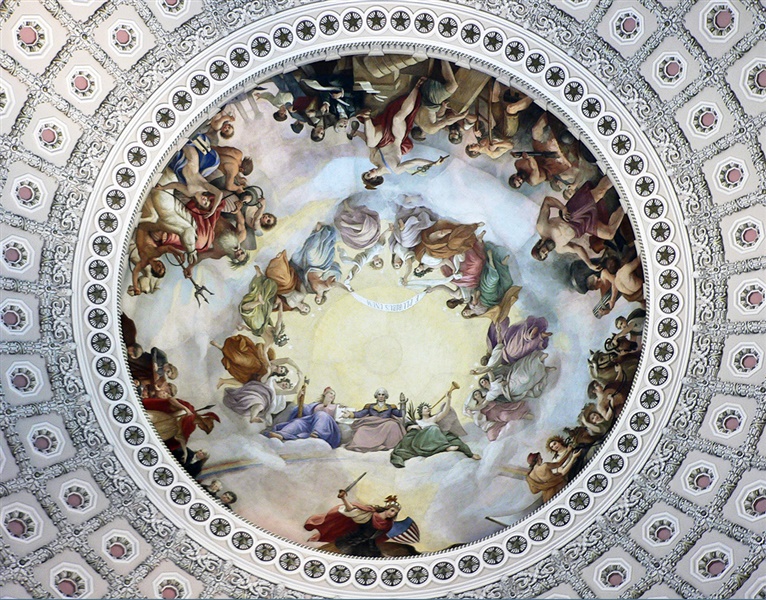 The Apotheosis of Washington, by Constantino Brumidi, CC BY-SA 3.0.

For example, it was in the year the war ended—1865—that Constantino Brumidi painted The Apotheosis of Washington in the US Capitol rotunda building. Reminiscent of artwork found in European churches and throne rooms, this painting depicted Washington as a saintly figure, rising to heaven. He is flanked by two women—Liberty and Victory. Surrounding him are figures tied to Greco-Roman gods—War (Mars), Science (Minerva), Marine (Neptune), Commerce (Mercury), Mechanics (Vulcan), Agriculture (Ceres), and others. Each figure is also tied to American heroes: For example, Minerva is teaching Benjamin Franklin, Robert Fulton, and Samuel F.B. Morse, while Mercury gives money to Robert Morris, the banker behind the American Revolution.

Details of The Apotheosis of Washington. Public domain.

Holidays, with their roots in religion and monarchy, appealed as symbols in a similar way. Presidents’ Day was just one of several established in this period, first in the District of Columbia in 1879, and then throughout the whole country, five years later.  Originally, it only recognized Washington. For those trying to reunify the country, Washington was an easy consensus figure, recognized by both Northerners and Southerners.

In the years that followed, we as a country completed the slide from Jefferson walking alone to his inauguration to the full-scale, formal event with crowds, bands, and receptions that we have today—and if COVID 19 reduced the presidential inauguration’s scale in 2021, that change is probably only temporary. Similarly, over time, Presidents’ Day came to be a federal holiday and an important day in the school calendar as well. Now, we hardly think about its meaning.  Many people probably assume it always existed. I might argue, however, that in celebrating this day the way we do, we are much closer to the world before the American Revolution, when kings’ birthdays and holy days were enforced rituals, than we are to the America that immediately followed the Revolution, when holidays and rituals were seen as decadent and everyone was wary of any sign that a president might just try to become king.

[1] I cannot thank Dr. Sarah Crabtree enough for help with these details.

[2] Some books that look at the debate on rituals in early America include Michael Kammen’s Mystic Chords of Memory: The Transformation of Tradition in American Culture, New York: Penguin, 1993; David Waldstreicher’s In the Midst of Perpetual Fetes: The Making of American Nationalism, 1776–1820, Chapel Hill: The University of North Carolina Press, 1995; and Alfred F. Young’s, The Shoemaker and the Tea Party: Memory and the American Revolution, New York: Penguin, 2000.