How I learned to stop worrying and love nonfiction comics, and why you should too 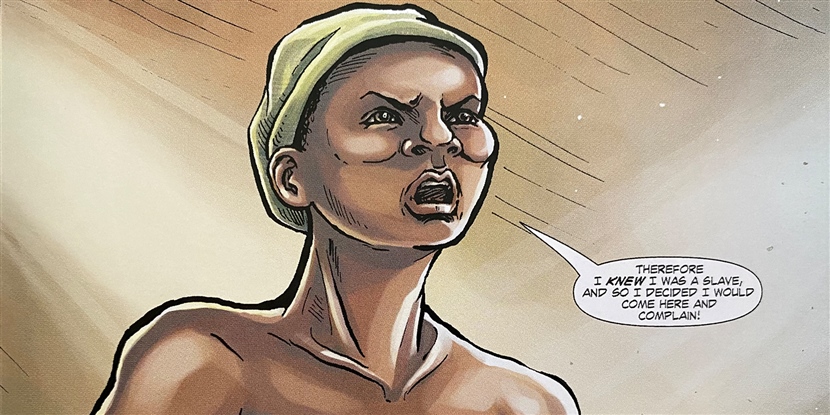 This is the second in a three-part series on the use of comics in the social studies classroom, focusing largely on Black creators and subjects, both in recognition of Black History Month and also to acknowledge the importance of celebrating diverse voices year-round.

In my last post, I described how the creation of the graphic history March provided a solution to Congressman John Lewis and his staff. Back in 2008, they faced the problem of producing an appealing, accurate, and meaningful popular history of the Civil Rights Movement.[1]  Around the same time, I faced a similar problem in my classroom, and I found a similar solution. 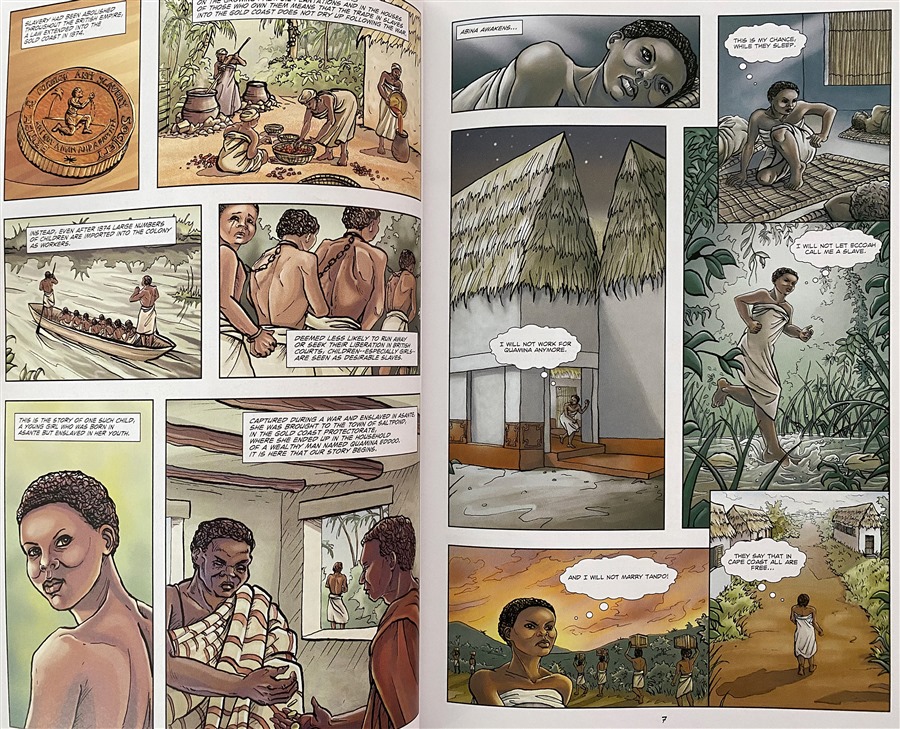 The opening pages of Abina and the Important Men, courtesy of the author.

By training, I am a professor of African history, formally educated in history departments in the United States, South Africa, and the United Kingdom. In these programs, I was taught to write histories that would be read solely by people with similar pedigrees. As a result, I find that most of my students—never mind the general public—don’t really like to read the monographs and professional articles of my discipline. As a professor at public universities such as the University of New Orleans and San Francisco State University, most of my classes were filled with undergraduates who needed the general education credit—they weren’t interested in becoming historians themselves.  Thus I have had the long-standing problem of finding materials that were both engaging and meaningful sources of information.

In my first year of teaching, I was assigned the world history “survey” class. Back in the late 1990s, this course was designed as a survey of 500 years of world history in 15 weeks. But I soon found that although students came away from the class with some understanding of the patterns of human communities and networks in history, they gained very little insight into humanity. They could neither see how humans were agents in these patterns, nor how the patterns affected those humans. Nor could they meaningfully see how they themselves, as individuals, were part of this interplay. In the words of Thomas C. Holt, by “Privileging the macro level,” I was teaching a world history that “yields atrophied, lifeless, passionless depictions,” and rendered invisible the stories of human experience that are “possibly essential resources in struggles for self-realization and defense.”[2] I also quickly recognized a related problem: No matter how hard I tried, those individuals who did appear in textbook material were mainly European men.

How could I change my teaching to solve this problem? As I set out to to answer that question, I realized that any solution would have to have three dimensions. First, it would need to tell the stories of humans within a web of regional and global systems and meanings that they themselves were helping to create. Second, I realized this was an opportunity to share with students the stories of individuals from communities that were normally incorrectly reduced to “barbarous tribes in picturesque but irrelevant parts of the globe.” And the third, perhaps most important dimension: For students to identify with and empathize with these individuals, I would have to tell these stories in a language that was meaningful to them. 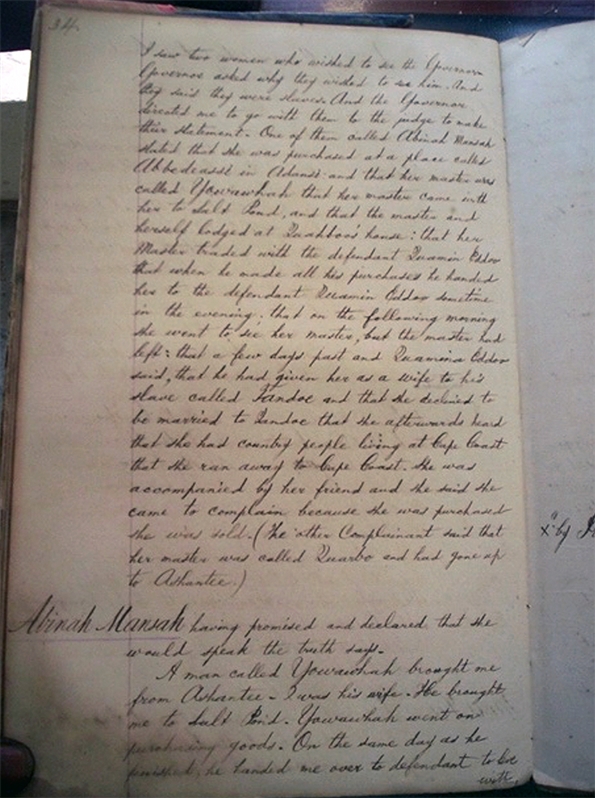 A page of the original documentary record of the case of Abina Mansah, courtesy of the author.

I found my answer in comics. As I argued in my last blog post, comics have historically been a medium that allows allows for the invocation of ideas and stories of the people on the margins of society. Comics also have a unique, well-studied capacity to engage our empathy and allow us to identify with their subjects. And they don’t suffer as tools for communicating sophisticated ideas, either. By combining two modes of communication—writing and images—they allow the creator to convey meaning through both visual and textual means.

Comics would give me the tool to redesign my world history course. For content, I turned to my own research. I identified a source that I had always loved but that was unknown: the case of a young, enslaved African woman who argued with lawyers, judges, and other important men. I began with her powerful words about her suffering and her strength, her resolve to control her own life. I found an artist, South African Liz Clarke, and together we slowly created an interpretation of the story and perspective of a woman who was caught in that web of systems—colonialism, slavery, and tradition—but who nevertheless fought for her own liberation and managed to shape her world. The result was Abina and the Important Men: A Graphic History.[3] To make this comic impactful, I drew upon the input of those who spurred me to the creation of this graphic history in the first place—my students. They let me try out the material in class, and their reactions and ideas drove the lesson plans and pedagogical toolset that we built into the book. 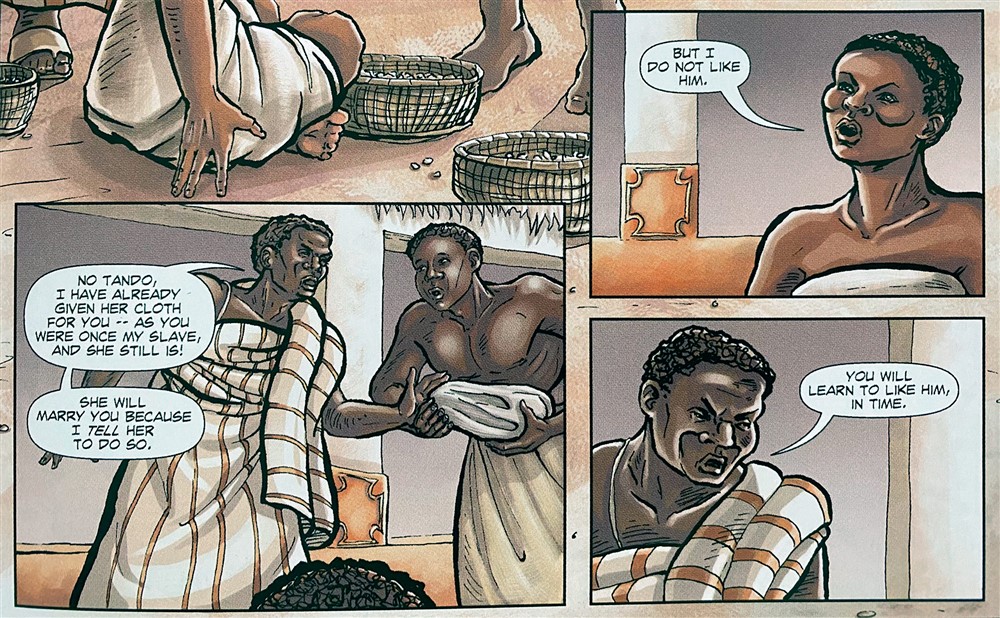 Detail from interior pages of Abina and the Important Men, courtesy of the author.

When Abina and the Important Men was published in 2012, I was thrilled by the response. Most important to me, the book was quickly adopted in classrooms around the country, first in colleges and universities, then overwhelmingly in high schools. But I have to admit that I didn’t really understand why it succeeded. I loved comics, and I had now co-created one, but I didn’t really know much about why and how they worked. Abina’s success drove me to find out. I started to read academic studies about comics in the fields of communication studies, art, psychology, and education. Some of them date back to the fantastic and super pro-comic volume, The Journal of Educational Psychology, from 1944. These publications helped me to develop an awareness of how and why comics can be useful in the social studies classroom. I described some of those findings in my last post, "A Serious History of Black Comics Creators". In my next post I will share with you how these studies bore fruit in the graphic biographies of the World History Project.