Now that’s what I call a driving question!

We asked the OER Project Teacher Community for some “first car” stories, and you did not disappoint. Although it’s been 114 years since the Model T went into mass production—fundamentally altering travel, energy, and air quality—more recent variations of our “fine four-fendered friends” still provide rich and vivid personal histories.

On the one hand, cars tend to become characters in the stories of our peers’ lives. For example, take “Cutty,” Anne Koschmeider’s 1988 Cutlass Ciera, whose failing locks inspired a creative method of entry—through the back seat. Or “The Beast,” Curt Greeley’s 1965 Chevy Bel Air, a vessel in such need of personal attention that Curt took an automotive class at a junior college just to keep it running. Despite naming her bright orange 1979 Plymouth Horizon “Pumpkin,” Kathy Hays was unable to summon a fairy godmother and simply drove herself to the ball.

But on the other hand, it is often the historical events that took place in and around our cars that make them memorable, like Chris Steussy accidentally smashing the back window of his 1980 Chevy Chevette with (what else) a beer keg. (Side note: If you are younger than 50 and have never been subjected to the ad jingle “Chevy Chevette, it’ll drive you happy!” consider yourself lucky, and do NOT Google it.) Of course, losing a window may seem minor compared Hayden Brown's problem with his 1974 Leyland Mini. This car was so tiny that his friends used to pick it up and hide it when Hayden wasn’t around.

Cold War historians will appreciate the complexity of Pierre Sirois’s adventures in his Soviet-era 1980 Lada, which included blasting Springsteen’s “Born in the U.S.A.” through the trunk’s subwoofers while cruising the mean streets of Canada. And the political intrigue doesn’t end there—Laura Massa’s 1998 Dodge Neon, her first car after coming to live in the United States, conked out on her way to an interview with Homeland Security!

Like so many postindustrial innovations, it’s amazing to think that our species did just fine without cars for 250,000 years, yet they now feel as vital as opposable thumbs. Cars are a part of us. And because we like to think we can find a car that suits our personality, they come in a wide variety. But of course, one’s first car usually materializes in more of a beggars-can’t-be-chooser’s situation. So please take some time to digest this completely unnecessary timeline of the OER Project Community’s first cars and the people who got stuck with them. As Mike Skomba, (whose first and second vehicles were family hand-me-downs) points out, this is “CCOT at its finest.” 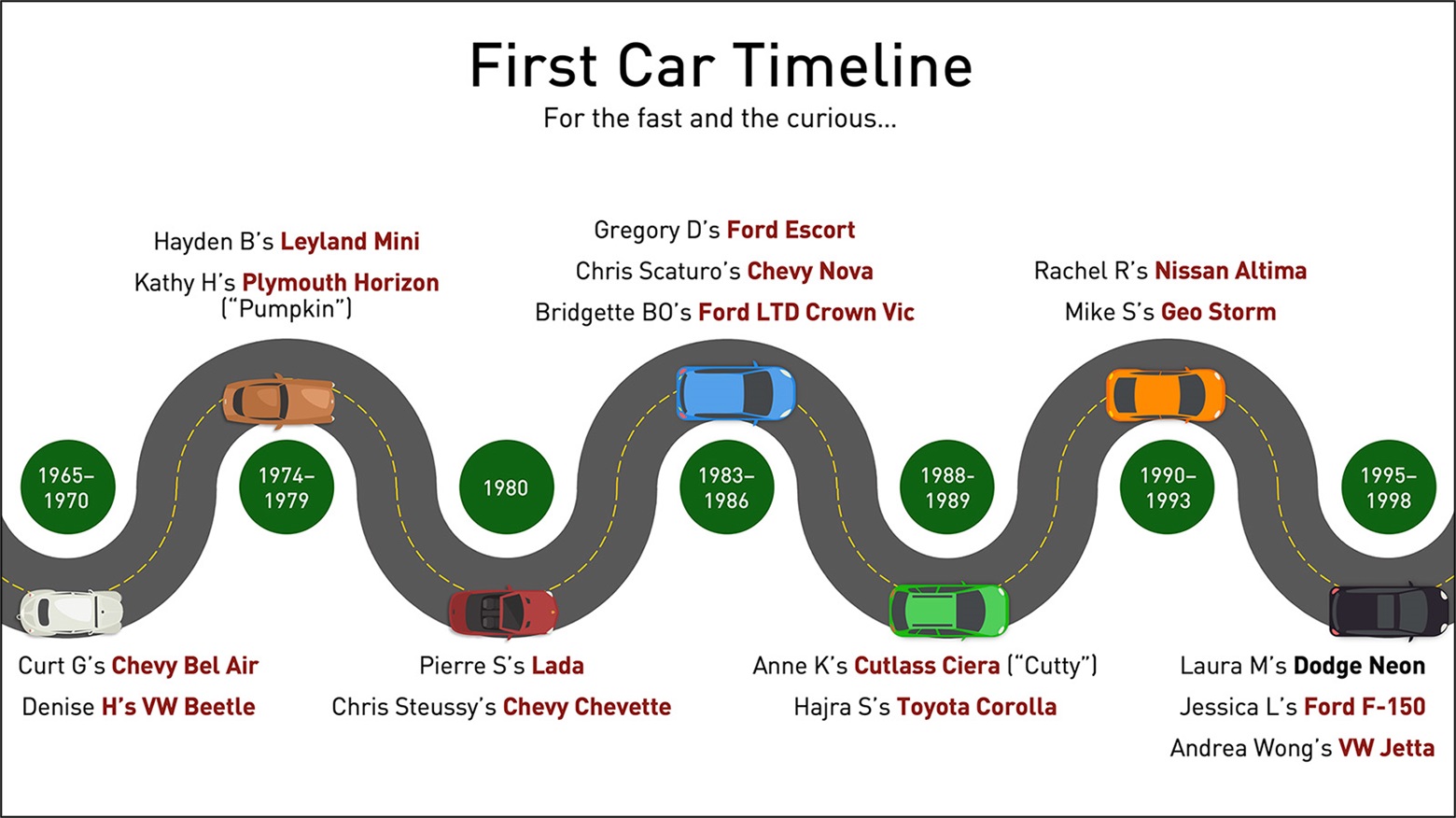 Of all our intriguing submissions, we were most curious about Chris Scaturo’s 1986 Chevy Nova. As reliable as it was dilapidated, the car’s struggles seemed to mirror the emotional experience of many of us during the pandemic, continuing to run despite considerable wear and tear. So we pulled up next to Chris and rolled down our windows to ask a few questions … 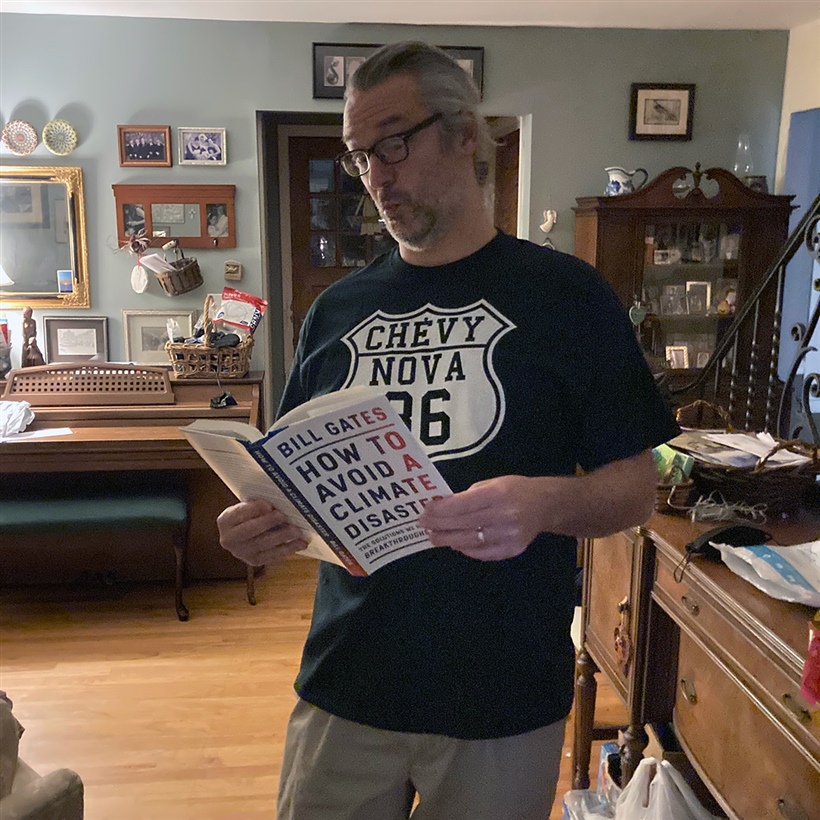 My highlights all come from notes written to me by students. My two favorites are:

OER: What is your favorite memory of your first car?

Chris: My car was totaled when I stopped at a red light and the car behind me didn't. The accident caved my trunk in. The totaled car sat in front of my parents’ house for what seemed like forever. Finally, on a late November day, the insurance company called and said they would pick it up in 20 minutes. In a panic, I ran outside and threw all my stuff from the car on the front lawn but could not get into the trunk. I had to use a pickaxe to open it and by the time I did, it was dark. Still panicking, I didn't have a flashlight, so I wrapped an old sock around the pickaxe and set it on fire. I remember being quite proud of my ingenuity.

It worked great for almost 30 seconds. At that point, the sock burned up and fell to the ground. I kicked it down the sewer drain to get it out of the road. I would like to remind you it was November, a typically dry month in New Jersey. Down the sewer drain was a significant amount of leaves (dry leaves) which, you know, caught fire.

Smoke soon began billowing up not only from my storm drain but also from one further down the street. Panicking even more, I ran to our outside faucet to notice the hose had been put away for the winter, but I did find a three-gallon watering can. After maybe 50 trips back and forth between the faucet and the watering can, I more or less simultaneously put out the fire, got the tow truck guys to tow my car, AND convince the fire crew that everything was under control. My mom came home right as the fire truck was leaving, and all she said was, "Do I want to know?" When I responded with a no, she then told me to get all my **** off the front lawn.

OER: We've asked about your first car, let's move to the future. What's your dream car?

Chris: I couldn't care less about cars. To me, they are literally a way to get from Point A to Point B. I would like a car that is good for the environment. I also like heated seats. I don't know if they have a negative effect on the environment, but if they don't, I guess [my dream car would be] an electric car with heated seats. That's [also] inexpensive. And has access to the trunk from the back seat. That is now also important to me.

OER: Do you have any words of wisdom to share with teachers?

Chris: Remember your students are kids.