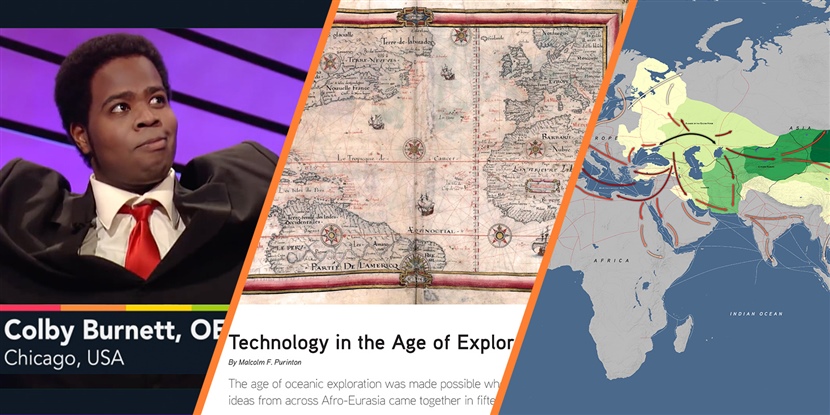 As you may have seen, the OER Project is releasing a whole new World History Project (WHP) course—WHP 1200 to the Present—as part of our summer update. But that’s not where the WHP updates stop! From new videos—for the WHP courses as well as for Teaching World History—to a new map series, we have plenty of fun new stuff for you, regardless of which WHP course you teach!

As it did for many of you, the pandemic ruined our travel plans. We had hoped to hop on a plane and interview experts around the world, as we did for our Ghana, United Kingdom, and Puerto Rico videos. Sadly, that wasn’t possible. But we know you kept on teaching—whether it was in a mask or at your kitchen table—and we of course wanted to keep on supporting you. So we decided to remotely film eight new videos featuring ten different experts, covering three different international arcs. Remote filming presented some new challenges, but it gave us the flexibility to interview more experts and “travel” to more locations than we would have otherwise. In addition to extending our coverage in the Caribbean, China, and the Middle East, these videos connect to several world-historical themes, including revolutions, long-distance trade, Islam, empires, and globalization. 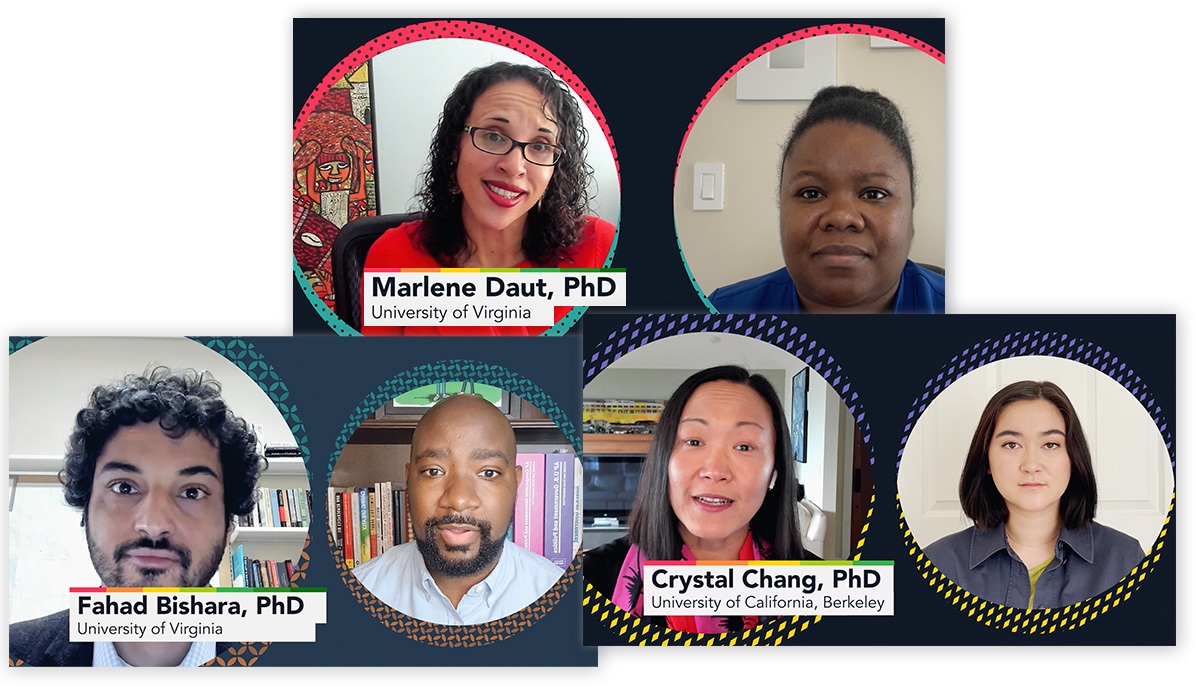 The two new videos filmed in this arc complement the existing WHP video Decolonization and the Cold War: Through a Caribbean Lens. This arc is hosted by Sharika Crawford, US Naval Academy professor of Latin American history.

Societies in the precolonial Caribbean are often ignored in history textbooks, but people have lived here for over 7,000 years, long before Columbus landed in 1492 CE. This video uses archaeology to explore the vibrant cultures, complex societies, and extensive trade networks that linked the islands of the Caribbean for millennia before the Spanish arrived.

The revolutions in the Atlantic world shook the foundations of global power, and none so much as the Haitian Revolution. This video examines how colonial hierarchies, fictional narratives, and networks of the enslaved all shaped the Atlantic world’s most radical revolution. We also explore how the impact of the revolution extended beyond 1805, as generations of Haitians fought to end slavery and maintain the independence of their new nation.

In this arc, Francesca Hodges, a UC Berkeley student and journalism major, serves as host—interviewing experts and guiding us from the Song Dynasty to present-day China.

Silk and the Song Dynasty

Silk was more than just fancy clothing. It funded the rise of Song Dynasty China and was the linchpin of the largest trading system of the medieval world. English wool and Indian cotton, while important trade goods across Eurasia, couldn’t compete. Silk was the medium for intricate art, the currency that paid large armies, and the symbol of imperial power. In this video, we explore the myths and the history that made Song Dynasty China a silk powerhouse.

In the first half of the twentieth century, the great power China lay wounded. Its peasants were impoverished, its armies humiliated, and its lands increasingly controlled by enemies. After the Second World War, however, one of the greatest revolutions of world history brought the Communist Party to power in China. The result was both glory and hardship, but the revolution laid the groundwork for China’s global resurgence. In this video, we look at the Chinese Communist Revolution as a transformational event in both Chinese history and the global history of revolutions.

Global China into the 21st Century

There is no doubt that China is a modern superpower and a hub of globalization under the authoritarian rule of the Chinese Communist Party. But what does that actually mean for the Chinese people? Do they celebrate their new economic wealth? Or do they suffer under the weight of state surveillance and control? In this video, we explore the successes, and costs, of China’s great social contract.

Nate Bowling, 2016 Washington State Teacher of the Year and currently teaching at the American Community School in Abu Dhabi, is our guide for the Arabian Peninsula arc. 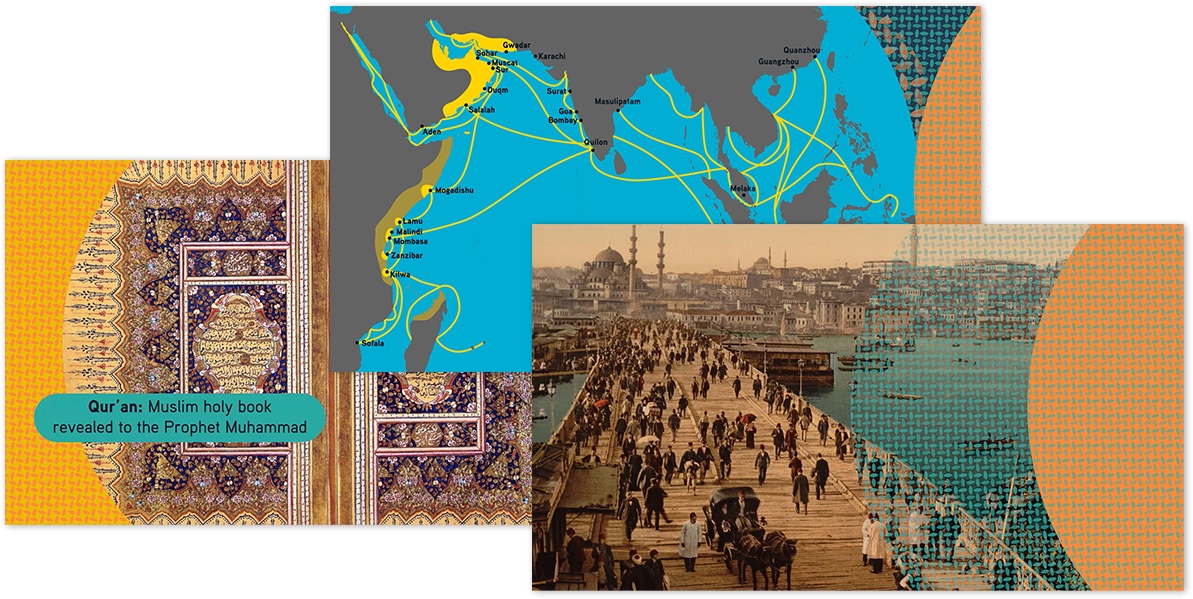 About one quarter of the world is Muslim. Yet Islam and its history are still poorly understood. This video explores Islam’s early history, how it spread and became a major world religion, and how historians have studied its complex history. To better understand Islam, we’ll explore what the historical evidence actually tells us about the emergence and early years of this global religion.

History students learn about a lot of empires, but the Omani Empire is rarely one of them. This empire broke the rules. We normally think of European empires as oceanic and Asian empires as land-based, but the Omani Empire was an oceanic empire ruled by Muslim Arab elites. It didn’t have an army or a bureaucracy, but it was imperial in other ways. In this video, we visit the “webby” empire of Oman, which transformed networks and communities in the Indian Ocean from the seventeenth century to the nineteenth.

World War I and the Middle East

The Middle East is the forgotten theater of the First World War. If students have heard of it, they probably think of Lawrence of Arabia. But he played only a minor role. In this video, we explore how Arab revolutionaries allied themselves with the British and rose up against their Ottoman overlords, only to be betrayed in 1919. We examine how imperialism, Arab nationalism, and the First World War all played a role in shaping the borders of the modern Middle East.

Nationalism is the most impactful ideology in modern history. This video defines nationalism, explains why it was a break from the past, and why it is so important today. As a companion to What Is Fascism? it explains where and why nationalism emerged and sets the stage for all the other times students will encounter it in this course.

We teamed up with our friends Kim and Colby to create some more videos for your PD-viewing pleasure. And while we couldn’t all get together in a studio, the Kim/Colby connection is still strong, even from Queensland, Australia, to Chicago, USA! We have six new videos: 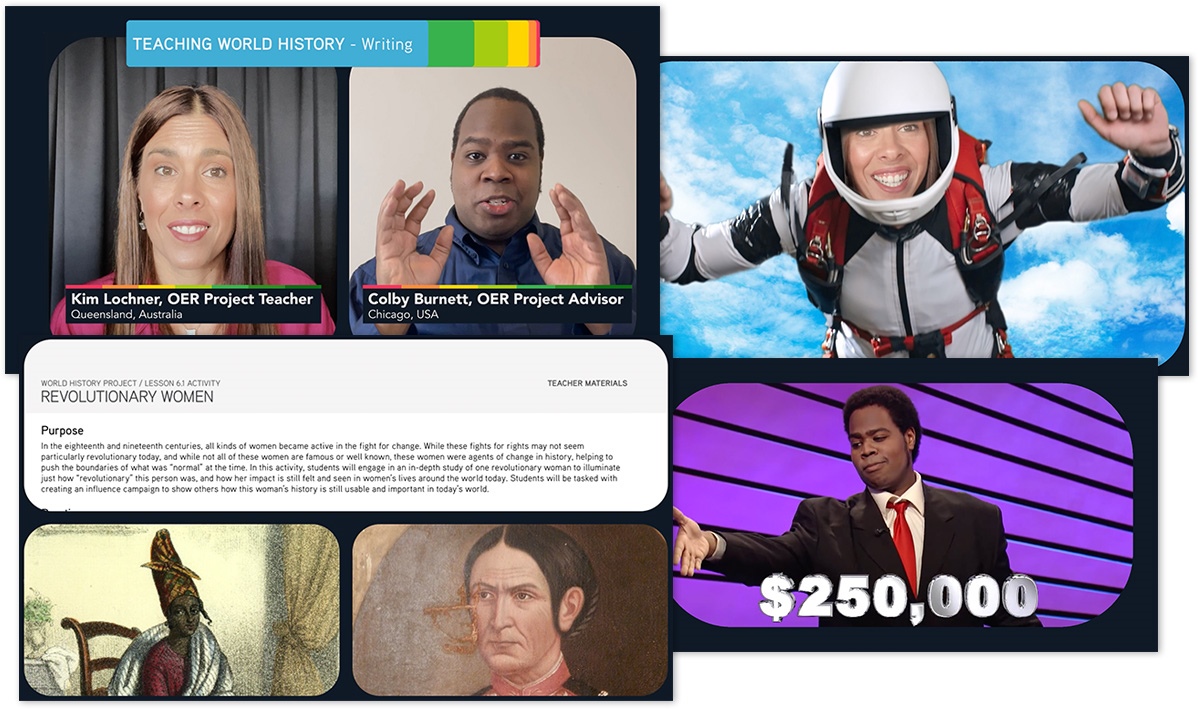 Assessment: Assessment ≠ tests, and we have lots of options in WHP! This video highlights the many different opportunities for assessment throughout our courses—both formative (or informative, as we like to call it) and summative. (Origins Session 5.4, 1750 Session 5.5)

Writing: Building writing skills requires practice. Lots of it. But it doesn’t always need to be in the form of long essays! There are plenty of opportunities for writing in WHP.

Routines: We all know how important routines are for establishing a structured learning environment—whether online or in person. And you likely have already established plenty of your own routines. But there are many other routines embedded in the OER Project. (Session 3.4)

Fun: History and fun? But of course! WHP has plenty of options for fun, some of which might seem obvious (simulations, graphic biographies), some less so. (Vocab? Yes, vocab!) (Session 4.4)

Frames: Frames are a key part of WHP. Our three course frames—communities, networks, and production and distribution—help students build narratives by applying different lenses to historical events, which will help them   make sense of the immensity of world history. (Session 2.1)

We know that understanding geography and maps is something students often struggle with (let’s face it: many adults do too!). So, we’re excited to announce that we’re introducing a new series of maps to help students orient themselves in time and space. These 11 highly detailed world maps stretch from 300 BCE to the Cold War, and each of them includes two layers: a political map that identifies the many communities that students will encounter in each unit, and a thematic map that will help them support, extend, and challenge the frame narratives. These maps will be integrated into all three WHP courses along with new mapping activities, which we’re building as well. In each era or unit, an opening geography activity will focus on identification, while more detailed closing activities ask students to apply their CCOT and causation skills as they analyze themes such as long-distance trade, the spread of religion, the transatlantic slave trade, and imperialism. 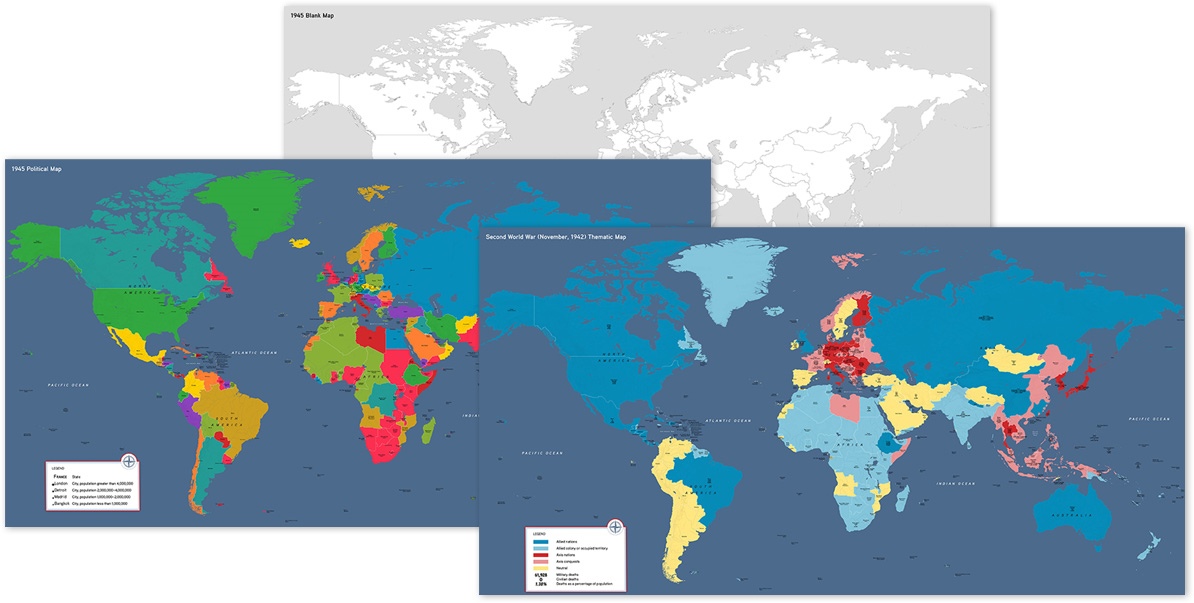 Here’s a glimpse at the periodization of the 11 new world maps and each one’s thematic focus, along with where they fall in each WHP course. You can also check out the WHP Maps Index for links to all the maps.

We’ve got a host of new articles for you and your students to enjoy! You’ll find these four within the lessons noted: 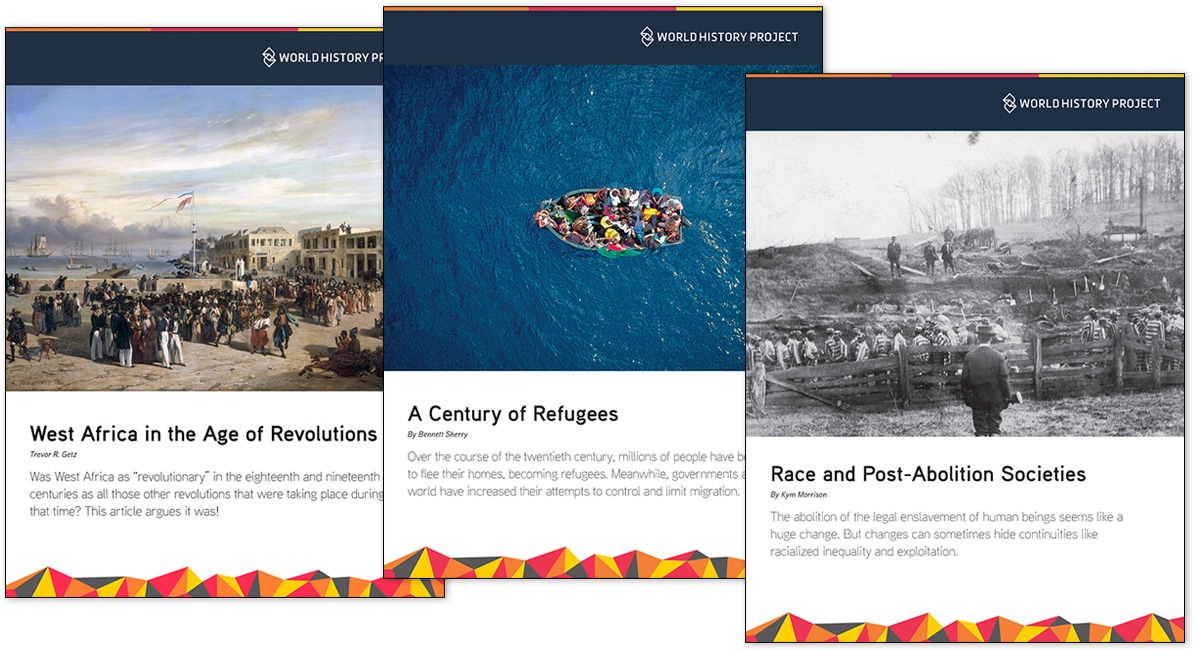 The articles below were written to help align with certain state standards. We’ve added them to the Other Materials sections in Origins and 1750 (see specific locations below) so as not to overload our lessons (we know some of them are already quite lengthy!). Note that due to the website structure, we are unable to add the usual corresponding copy (Summary, Purpose, Process) at this point.

We also have some new graphic biographies for those of you teaching Origins! 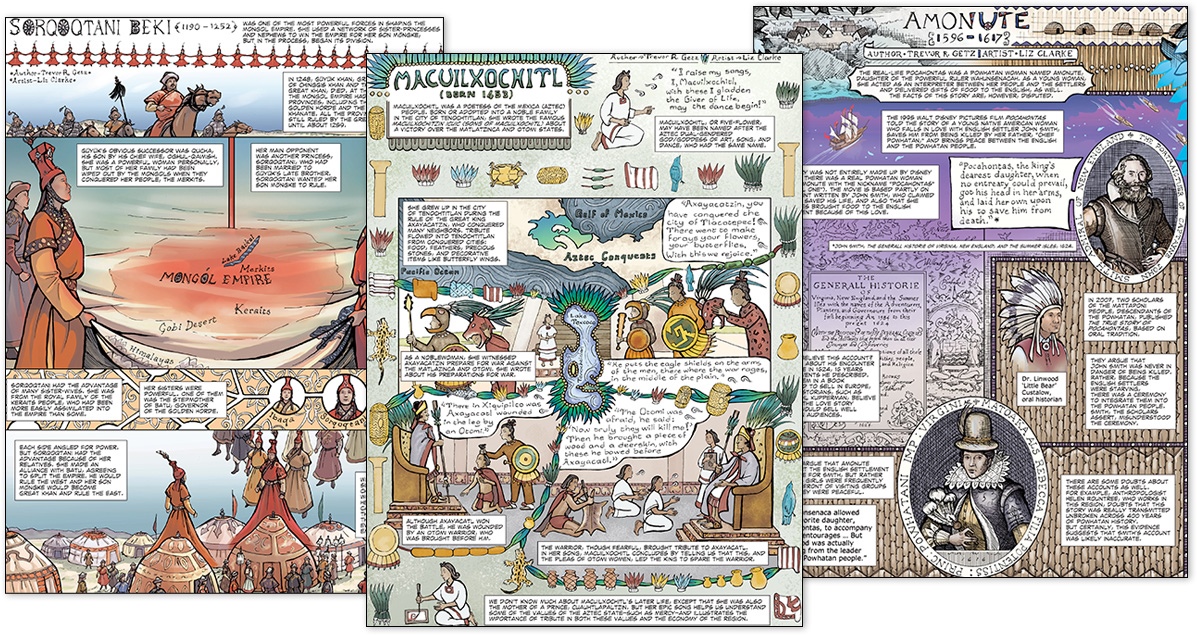 For both Origins and 1750, be on the lookout for changed locations of the existing graphic biographies. We didn’t want to overload the final lesson in each era/unit (where they were initially placed), so we’ve moved them to align more closely with the specific lesson objectives. Here’s a list of where you can find all the graphic biographies.