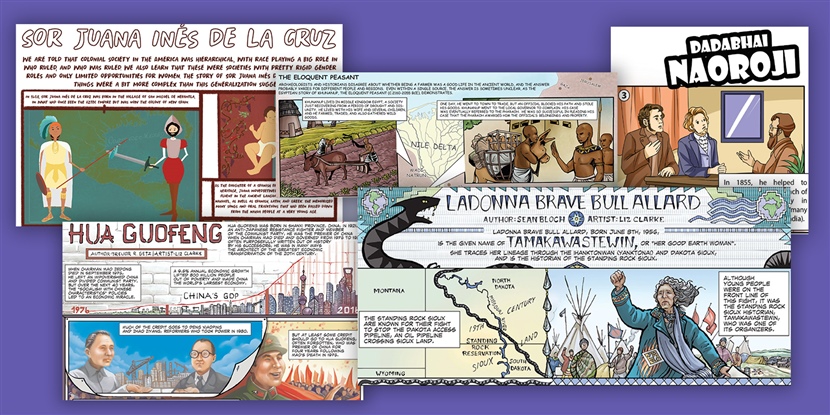 Where do you and your students fit in world history?

The history of the world is an immeasurably large topic spanning millennia of time and huge stretches of land and ocean. A person, by contrast, is usually between three and six feet tall and generally lives for less than a century. It follows that humans fit into world history in such a way that they basically disappear in the vastness of space-time. In fact, that has been a problem for world historians as long as the field has existed: How can we talk about world history in a way that makes visible the actions and experiences of human beings?

Graphic biographies are one-page histories of people—usually not the ones you’re likely to know of. There’s no Napoleon...no Shi Huangdi...no Queen Nzinga. Admittedly, however, most of these graphic biography subjects are not what you’d call “everyday” people, because powerful people are more likely to have their stories preserved in the historical record. But powerful or not, the people whose stories we share in this collection are individuals with unique connections to world history—the Chinese soldier who was captured by the Abbasids and wrote to his family about his travels; the Asante queen mother who united her country against British conquest; the Filipino official who gave refuge to Jews fleeing the Holocaust; the Egyptian intellectual who studied Enlightenment France; the enslaved African who created a new community in Brazil; and many more. We do get to tell the stories of some everyday people, such as refugees in the twentieth century, a period for which we have lots of records, and there’s the occasional everyday person who arises almost by chance out of the archival records of the distant past.

Whether they’re “important” or are “everyday,” each of these individuals has their own story, their own history, and those stories weave in and out of the global themes of their era. Their experiences highlight, and sometimes bring into question, developments on a global scale that students are studying. Sometimes, their stories contrast with each other—as with the patriotic nurse who volunteered to serve with American forces during the First World War and the German socialist, a woman who went to jail for opposing the same conflict; or the two Ugandan workers in the United Arab Emirates, one of whom built a house using money from her work abroad, while the other was abused and underpaid. 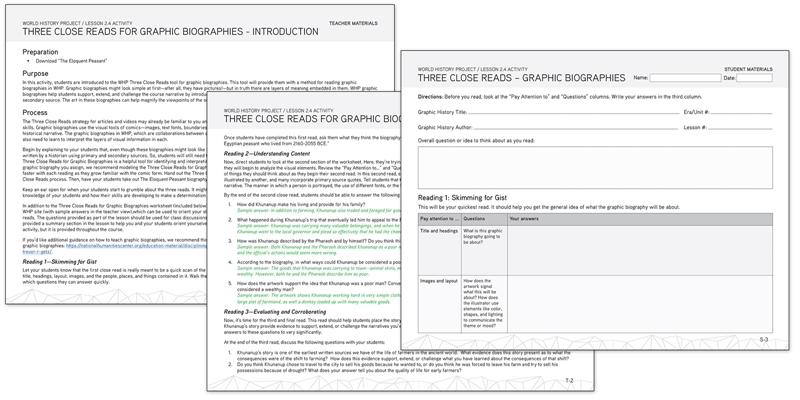 All the biographies—just like all our articles and videos—are accompanied by a Three Close Reads approach, in this case. We provide questions that guide students through three layers of understanding, which helps them fit these human experiences into the wider themes of the era and the frames that cross time. This will help students to read both the art and the text of these biographies in a critical way, identifying both visual and written language, expression, and metaphor. Teacher-facing materials also offer an extended written biography, which gives you additional detail for each of the subjects. We’re also in the process of developing some optional activities, along with an introductory video, that will help students understand how to read graphic sources. We’ll let you know when those are published, but we wanted to make sure you had access to these graphic biographies in the meantime! Check them out in the final lesson of each era (Origins) and unit (1750).

If you enjoyed this post, there's a lot more where that came from! Register for an OER Project account to join an active community of fellow educators, and access our full courses (including these graphic biographies) free of charge!