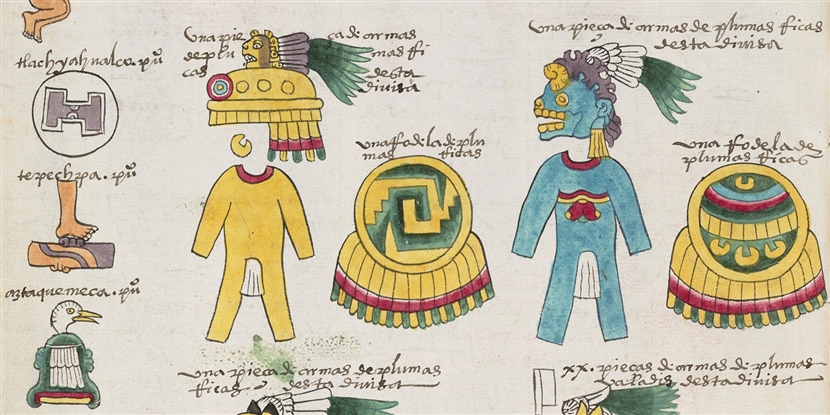 Remember when your students learned about the Chinese tribute system as part of the expanding trade networks under the Song dynasty? They might have concluded that the Chinese were the only state that required gifts from neighboring states as acknowledgement of Chinese superiority and as a means of accessing Chinese trade goods. In Unit 3, however, you might entice students to uncover how the Aztecs similarly used a tribute system to demonstrate their power. Students can employ the illustrative example of the Mexica tribute lists as evidence of Aztec rulers expanding their power by compelling conquered subjects and neighboring states to send luxury goods to the Aztec capital.

Like their counterparts in Africa, Asia, and Europe, the Aztecs utilized tributary payments to expand their influence and power in Central America. Most of the elites around the world in the fifteenth century wanted exotic (foreign) goods to signal their higher status, and the Mexica elites of the Aztec Empire were no different. Throughout the fifteenth and early sixteenth centuries, the Aztecs required that large quantities (perhaps millions) of elaborately decorated cotton textiles, precious stones (jadeite and turquoise), feather shields, and razor-sharp obsidian blades be sent annually to the Aztec capital, Tenochtitlan, as tribute. Why did the Mexica want these items? Maintaining a steady flow of luxury goods ensured the loyalty of the Mexica nobility to the Aztec rulers and helped the Aztec rulers to establish dominance in Mesoamerica. Exacting tribute from conquered subjects and neighboring states helped Aztec rulers maintain control at home and abroad.

Below are four pages from the Codex Mendoza that illustrate how the Mexica recorded the tribute.

On the left, glyphs identify the places that sent the items shown on the rest of the page. 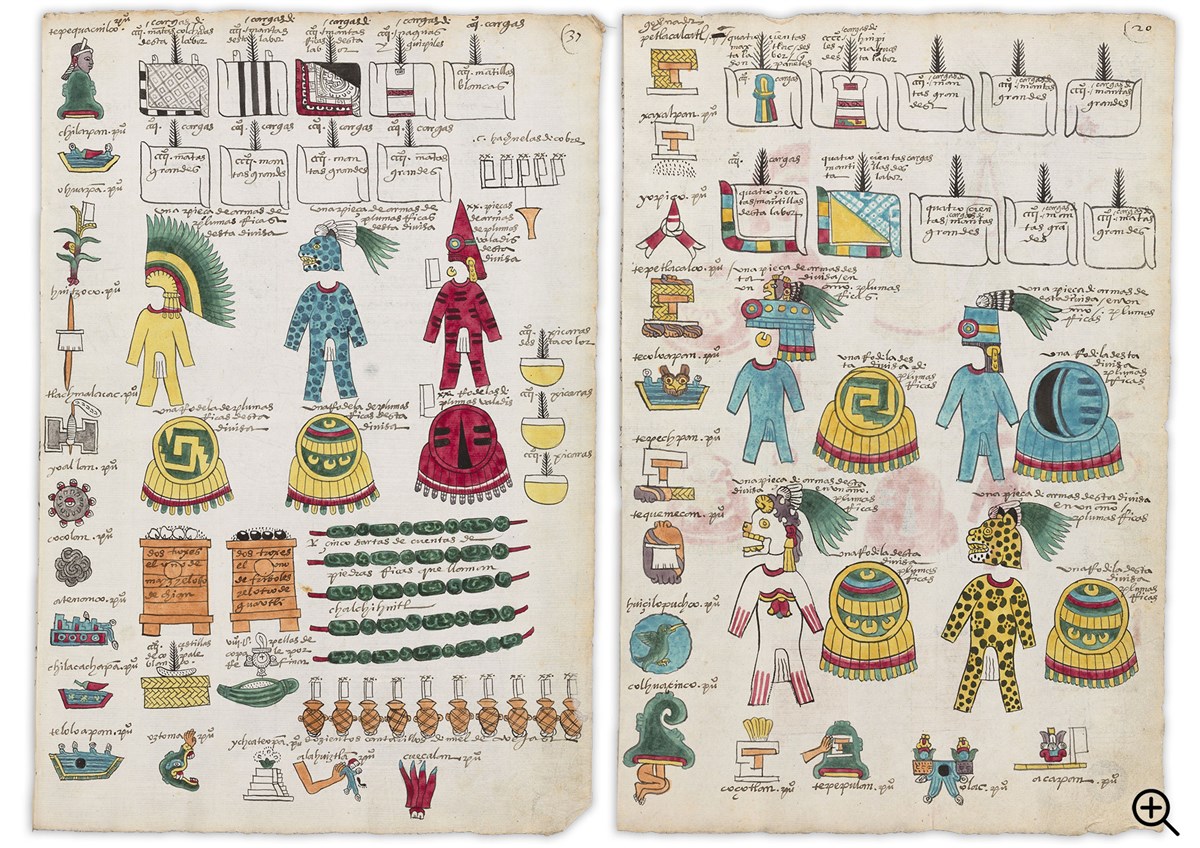 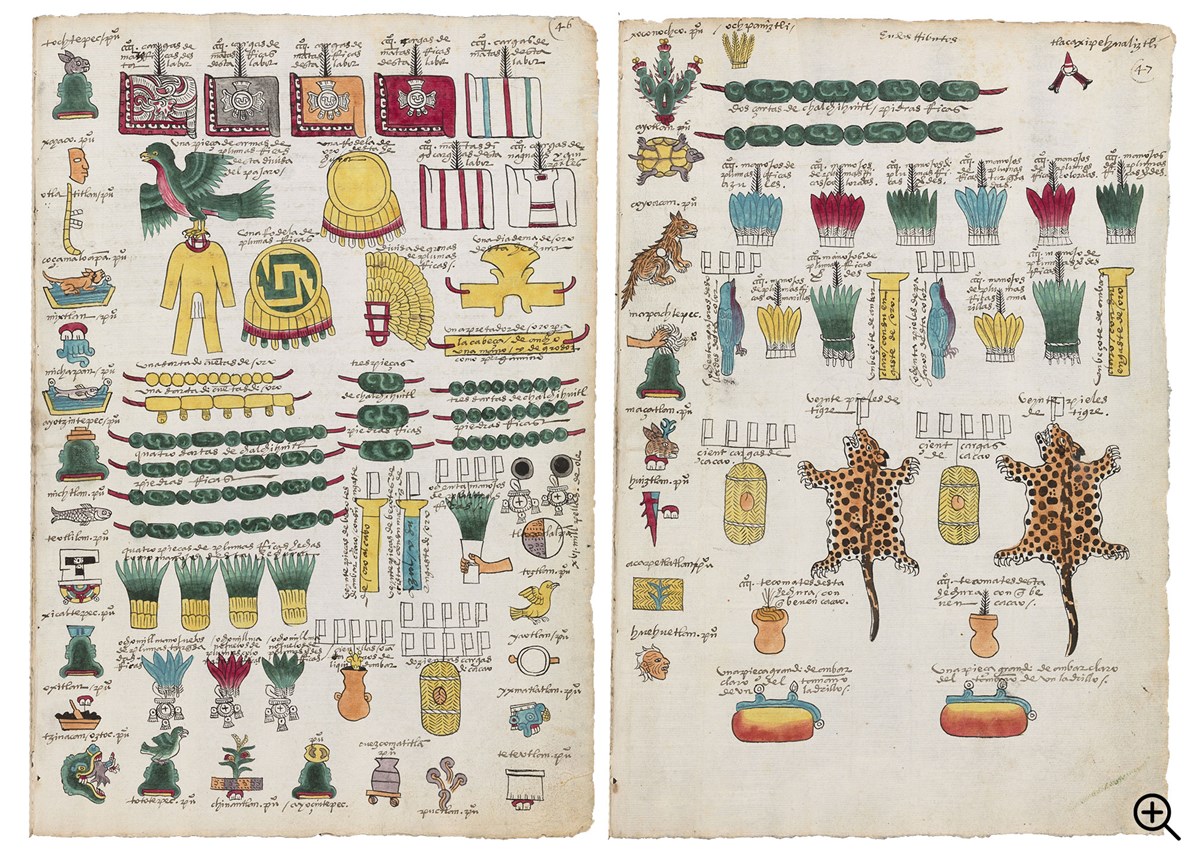 The Mexica tribute lists pictured above reveal the luxury goods sent from outlying regions for the emperor and his nobles. The nobility in Tenochtitlan were integral to the functioning of the empire. They served as tax collectors, judges, priests, ambassadors, treasurers, scribes, and warriors. The nobles’ attire and diet demonstrated their higher social status. For example, it’s always a good idea to keep your elite soldiers happy, and the Aztec warrior regalia included exotic bird feathers and leopard skins. The emperor maintained the elite’s loyalty by ensuring that these luxury goods flowed to the capital.

The Aztec rulers compelled tribute from neighboring states through armed threats. The pochteca, a hereditary guild of armed merchants, functioned as spies to collect information in advance of battle against those neighboring states that had goods desired by the Aztec elite. The Mexica adopted their tax and tribute collection methods from the city-state of Azcapotzalo, the previously dominant political power. In 1426, the Mexica allied with the city-states of Tlacopan and Texcoco—creating the Triple Alliance—to defeat Azcapotzalo. The Mexica thus created the Aztec Empire, and they continued to rely on cooperation with the Triple Alliance for the regular collection of tribute items. Official tribute collectors, known as calpixque, supervised kings in conquered city-states to organize tribute collection. The calpixque punished those who failed to pay the required tribute.

Unlike the Chinese, whose political philosophy of Confucianism assumed that its civilizing influence was universal and could be adopted by any of its neighboring states, the Aztecs made little attempt to integrate the states on their periphery beyond demanding tribute. And there are plenty of other tribute-collection examples that your students can compare alongside the Aztec example to understand how rulers used a variety of methods to legitimize and consolidate their power in this period. For example, the Mughals and Ottomans contracted the job out to tax farmers such as zamindars and mültezim. Meanwhile, in the fifteenth century, the Ming dynasty began demanding some taxes be paid in silver. By the end of Unit 3, your students will have learned that tribute collection from conquered regions and neighboring states was just one of many methods employed by land-based empires around the world from c. 1450 to c. 1750 to expand, legitimize, and consolidate their power.

What illustrative examples do you use in your classroom to explain how states consolidated their power? Post your examples in the OER Project Teacher Community!