History is not set in stone 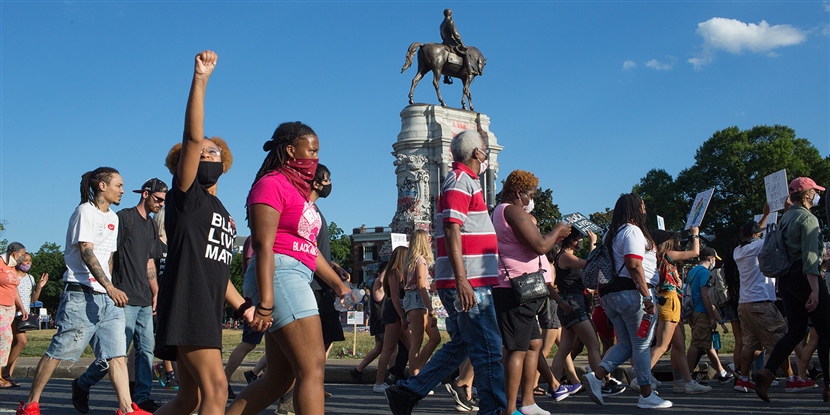 The world is facing a reckoning. This summer, protesters in the US, Senegal, the UK, Barbados, New Zealand, South Korea, and Belgium, among many other regions, have taken to the streets to stand against systemic racism in their justice systems. As protesters seek to dismantle racism today, many are also tearing down vestiges of our racist past. One after another, monuments to slave traders such as Edward Colston in Bristol, colonizers like King Leopold in Belgium, and US Confederate generals have come crashing down. However, this isn’t the first time that debates have raged over statues. Generations of Americans have sought to remove Confederate statues, while others claim the statues are part of our history and so should stand. But this is one of the few times in our collective global history that people around the world are protesting and demanding change together, in solidarity.

For those of us in the US, the Confederacy and the Civil War are of course part of our history—as are the Black Codes, Jim Crow laws, and segregation that came after. Yet, this history does not vanish simply because we remove statues glorifying it. I know of no historian who would argue that we should hide from history—it’s our job to remember, investigate, analyze, and educate others about these events. We have history books, museums, organizations, and required American history courses in high schools across this country.

In teaching about this moment in our history, we should ask students to contextualize and source these statues. When and why were these statues constructed, and for what purpose? Take a look at this graph from the Southern Poverty Law Center. It shows when different monuments to the Confederacy were built.

Whose Heritage? Public Symbols of the Confederacy, graph courtesy Southern Poverty Law Center. Download a larger version of this image.

The Civil War ended in 1865, but only a handful of memorials were built in the years after the war. The real monument craze began in the early twentieth century as Jim Crow laws were entrenched at local and state levels in both the South and the North. This period also saw the rise of the Ku Klux Klan (KKK) and the establishment of many organizations to honor the Confederacy, such as the United Daughters of the Confederacy (UDC) and the Sons of Confederate Veterans (SCV). In fact, the UDC was responsible for much of the funding of Confederate statues during the early twentieth century. These statues, which were donated to localities across the South, were intended to remind former slaves of “their place” in society—a place that was enshrined in segregation laws and the Supreme Court’s decision in Plessy v Ferguson of “separate but equal.”

Most of these monuments before the 1950s were concentrated in courthouses and public squares. However, in 1954, the Supreme Court decided to desegregate schools in Brown v Board of Education. As schools were forced to desegregate, new monuments started appearing on school grounds, ones named for prominent Confederate generals such as Robert E. Lee. Like earlier monuments, these were intended to intimidate Black students arriving at new schools. Purpose and context matter when we teach our students about these monuments.

Another way of teaching our students the importance of the history of racial injustice in America and around the world is to have your students participate in a historical exercise. Provide students with a map—this could be at the local, state, national, or global level—and have them investigate the names of schools, statues, streets, or cities on that map. Who are these places and things named after, and why? Chances are, they’ve never really examined why. Do these people deserve to have such important structures or streets named after them? What was the historical purpose of doing so? It’s actually a great way to have your students participate in historical research and really allow them to understand the motives of local city councils, governments, and organizations. Then, have your students investigate local, national, or global figures that fought for equality or change in the world. Ask your students to write to the local city council or their state or national congressperson to inform them of this history and if necessary, to ask for change and make recommendations of figures who might be more representative of diverse voices in our nation.

“Protesters stand on the statue of Marianne on Place de la Republique in Paris on June 13, 2020, during a rally as part of the ‘Black Lives Matter’ worldwide protests against racism and police brutality.” ©by Anne-Christine Poujoulat/AFP via Getty Images.

Historians and educators do not want to erase history. We want our students to learn about all of the highs and lows—the Civil War, the Civil Rights Movement, World War II, D-Day, and Hitler. We teach them to put this history in context and come to terms with the past in order to make sense of the present and hopefully, prepare for the future. For example, we teach our students about Hitler’s rise to power in the context of World War I and the rise of fascism, and we teach of his demise, including the destruction of the marble swastika in Nuremberg by the US Army in 1945. The Germans have chosen not to erect statues of Nazi generals, and for good reason. We also craft lessons on the fall of the Soviet Union and the dismantling of statues to Stalin. We do not forget these historical figures or their acts. They are the subjects of thousands of books, articles, and films. When we build and maintain monuments to glorify Confederate leaders, slave traders, and colonizers, we are not preserving history, we are making a statement about ourselves and what we believe, what our society stands for. What do you stand for?

Suggested readings and resources to use in the classroom:

Cobb, Jelani. “The Battle Over Confederate Monuments in New Orleans.” The New Yorker, 12 May 2017.

Landrieu, Mitch. “Mitch Landrieu’s Speech on the Removal of Confederate Monuments in New Orleans.” The New York Times, 23 May 2017.