Why do we teach about the Paleolithic era? How much time should we spend engaging with the most ancient of human histories, and how do we convince students that this stuff matters? Many world history and Big History teachers are familiar with these types of questions—there’s just so much history to teach! On the one hand, the experience of pre-agricultural foragers made up 99% of human existence. If we think about history as a way of understanding how the past shaped our present circumstances, there’s no doubt about the importance of this period. On the other hand, we lack stories of individuals to drive the narrative, and we know far less about this era than we do about the agricultural societies—even the ancient ones—that came later.

Still, the uncertainties surrounding our hunter-gatherer past provide a chance to erode the common (mistaken) belief among students that history is about accumulating unassailable facts. We can introduce the concept of historiographical debate by explaining that historians do not agree about the nature of Paleolithic art, or religion, or why Neanderthals became extinct. For example, during my lifetime, scholars insisted that humans first entered the Americas via the Bering Strait only about 13,000 years ago. But recent discoveries of footprints in the sands of New Mexico throw even that cherished “knowledge” back into the fray of historical debate. This is not the first time historiographical debates have simmered (or raged) around the arrival of hunter-gatherers in the Americas. Two BHP graphic biographies depict the conflict between establishment anthropologists like Ales Hrdlicka, who maintained that humans traveled over the Bering Straight only 3,000 years ago, and the amateur archaeologist George McJunkin, who discovered fossil evidence of humans dating back 10,000 years. Unfortunately, the professionals didn’t trust McJunkin’s find or the oral histories of Indigenous Americans. McJunkin was a Black cowboy, and his lack of credentials combined with the racism of the period led scholars like Hrdlicka to turn their backs on his find. 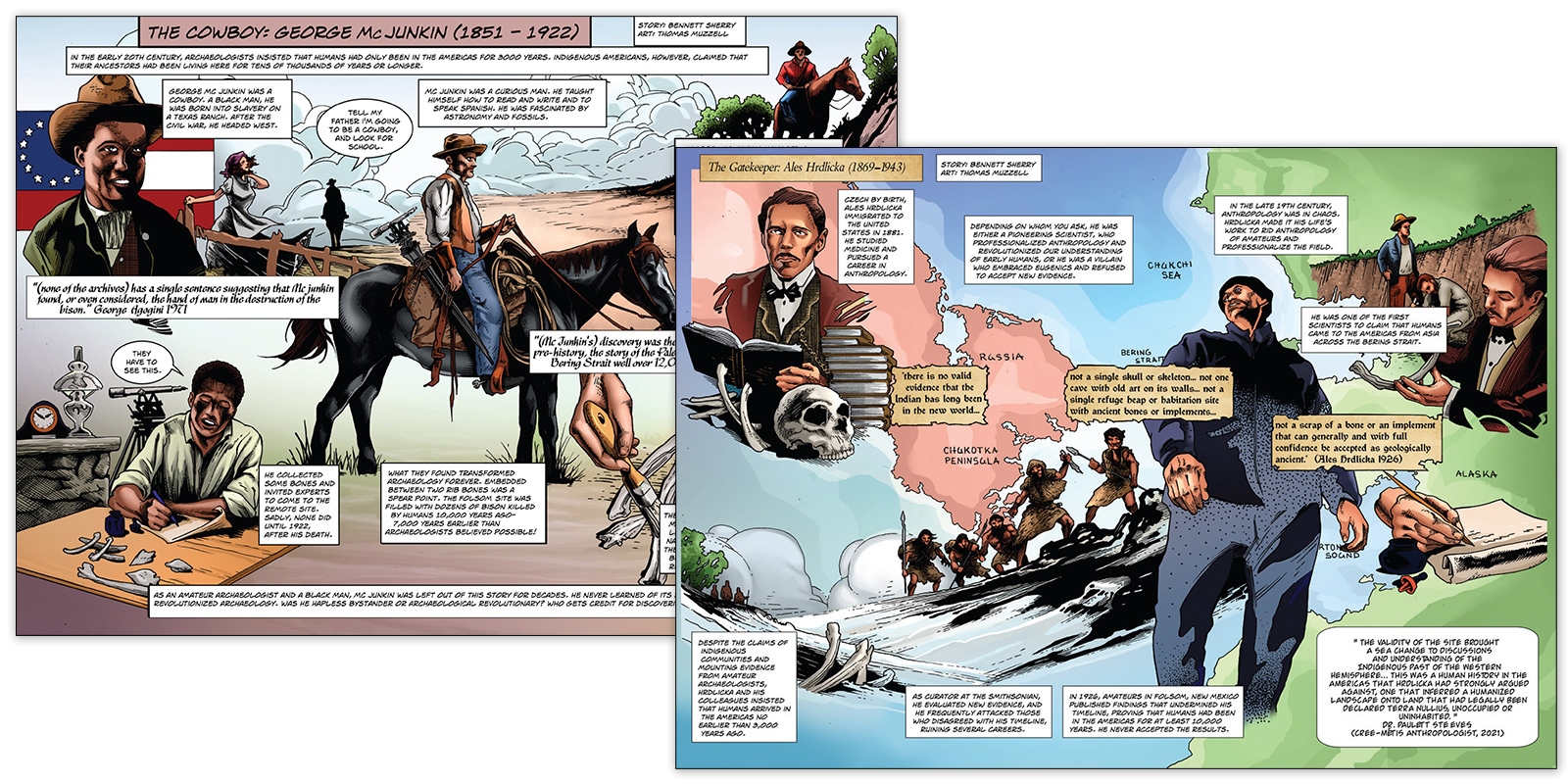 Equally important, the study of the Paleolithic era might be the best opportunity within a world-history curriculum to demonstrate to students the role interdisciplinary tools—including geology, genetics, linguistics, evolutionary biology, and anthropology—play in making sense of the world and the human past. The Era 2 Overview article, “The Earliest Humans,” in the WHP Origins course, serves as a useful introduction to this idea. The article explains that historians use linguistic evidence, DNA, and fossils to trace the migration of early humans across the globe. For young learners who love science, the intertwining of disciplines may be eye-opening. We don’t obtain our knowledge from books alone—even in history. In fact, to learn about hunter-gatherers, historians dig into cave art, bone fragments, shards of pottery, and we lean into the expertise of myriad other academic fields. 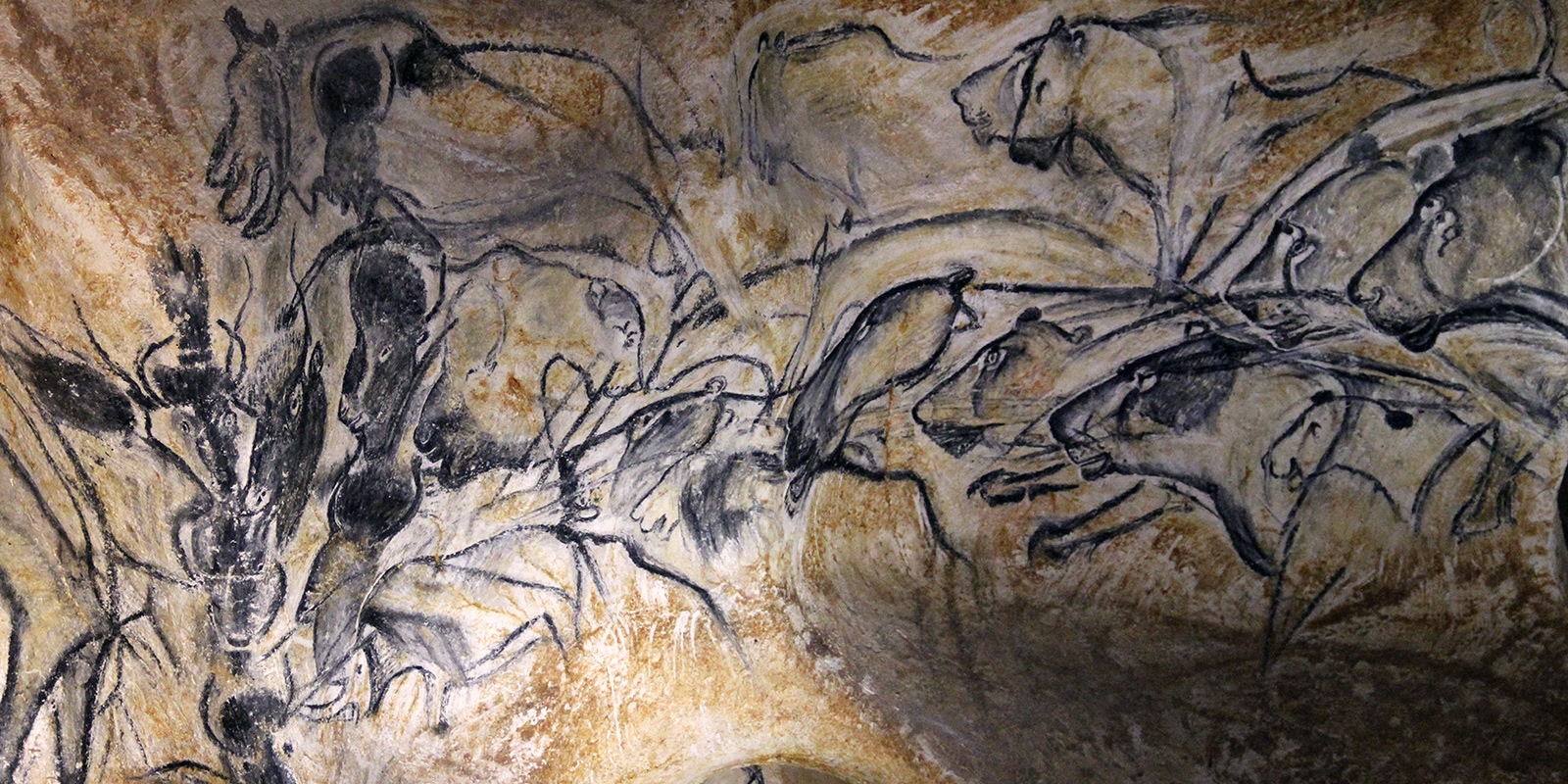 Plenty of recent popular histories have delved into the deep human past. Two of the most widely read are Jared Diamond’s Guns, Germs, and Steel and Yuval Noah Harari’s Sapiens. Both authors use interdisciplinary evidence to try to understand the path that led our ancestors from foraging to agriculture to the global complexity we live with today. Diamond’s article, “The Worst Mistake in the History of the Human Race,” serves as an accessible entryway for high-school students to a key historiographical debate around the Agricultural Revolution.

The most recent heavyweight to enter the ring is David Graeber and David Wengrow’s The Dawn of Everything: A New History of Humanity. Graeber (an anthropologist) and Wengrow (an archaeologist) provide a revisionist history of the hunter-gatherer period, arguing that generalists like Diamond and Harari (as well as the Enlightenment philosopher Jean-Jacques Rousseau and the psychologist Steven Pinker) ought to exit the debate about our distant path and leave it to experts on that period (like themselves), who examine and directly study the actual physical evidence. Graeber and Wengrow maintain that historians keep making the same mistake—ignoring archaeological evidence in favor of a traditional framework of progress—spinning what they call “evolutionist narratives.” They claim that historians are blinded by this evolutionist narrative of human history that asserts the Agricultural Revolution was the beginning of complexity (sedentary life, hierarchies, kingship, specialized labor, religion, and so on). In the authors’ view, the archaeological evidence is clear: foragers around the world created a wide array of social structures and all the trappings of complex societies—including towns—that we normally associate with post-Neolithic Revolution societies. To them, the Neolithic Revolution wasn’t a mistake. It wasn’t even a revolution!

How do we make sense of this complicated period and these historical debates in the brief time most teachers allot to the lives of hunter-gatherers? Jared Diamond’s article is certainly a helpful starting point, and Yuval Noah Harari recently published a graphic history of Sapiens (unfortunately, the format requires the purchase of a class set). The Dawn of Everything is a relatively easy read for educated adults, but teachers will find it difficult to extract a student-accessible excerpt due to the nature of the authors’ writing. One possibility is to use podcast conversations with these authors.

In my class, I’ve tried to resolve this dilemma by writing my own article synthesizing many of the key ideas. With this piece, I will also try to model for students some of the key writing strategies they should master over the course of the year, such as citations and introduction hooks that I developed this summer, called the Magical Camera and the Switcharoo. Can this article function at the start of the school year to model writing, communicate key content about foraging societies in an accessible way, and bring students into the higher-level thinking around historiography … all in an itty-bitty reading space? I think it can, although since school is just getting underway, I haven't had a chance to use this in the classroom yet. Feel free to try it out in your own classroom. If you do, let us know how it goes in the comments below—I'll be doing the same later this school year! (And again, just click here to access the article.)

I hope you find these ideas and this article helpful as you consider how to frame 99% of human existence for your students this fall. Please let me know in the comments below how any of this helps your class and what you would do differently!

About the author: David Sherrin is a social-studies teacher at Scarsdale High School who has published books on teaching history through role-plays, mock trials, and the arts. He teaches ninth- and tenth-grade world history and began using WHP materials last year. He is also the author of the children’s books Big Bad Wolf’s Yom Kippur and The Pirate Rabbi.

Cover image: Carved into large slabs of mountain rock in a remote area of Azerbaijan are human-made drawings on an impressive scale. It contains unique images depicting the lifestyle, culture and world view of the inhabitants of the area from the Upper Paleolithic up to the Middle Ages. This petroglyph, dated 6,000-5,000 BC, depicts a dancing scene with figures holding hands that is reminiscent of the traditional Azerbaijani dance or Yalli. © Reza / Getty Images.