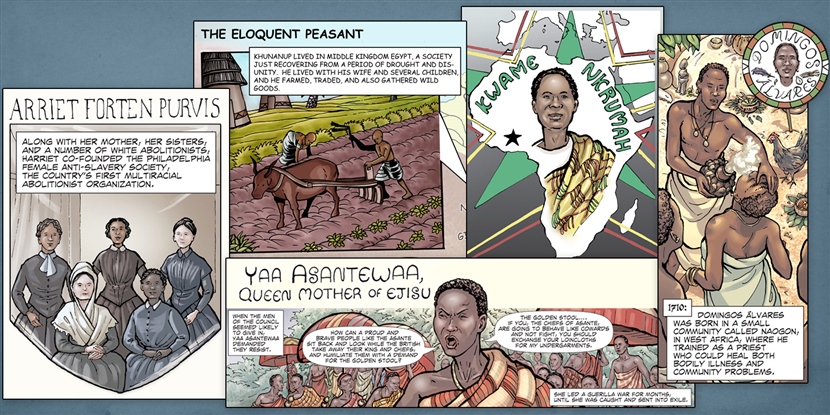 This is the final in a three-part series on the use of comics in the social studies classroom, focusing largely on Black creators and subjects, both in recognition of Black History Month and also to acknowledge the importance of celebrating diverse voices year-round.

In my last two posts, I’ve described some of the history of Black comics makers and explained how the act of creating a comic book about a Black woman’s experiences—Abina and the Important Men—led me to study the value of using comics in a classroom setting. It was that research that led me to the same conclusion as Andrew Aydin and Congressman John Lewis: Comics can help solve the two-prong problem of how to communicate big-scale ideas as well as individual human experiences.

You see, both US history courses (where Lewis’s March is in widespread use) and world history survey courses (for which I designed Abina and the Important Men) have an intrinsic challenge of telling a very big story to students whose main challenges and activities outside the classroom are pretty localized. We teachers struggle to get them to see the relevance of a national story, let alone a global story, when their families, jobs, and everyday experiences are still mostly situated in their own neighborhoods or cities.

I often call this a problem of “invisibility.” At the largest scale, humans in general just disappear into the stories of networks and nation-states that form the main substance of these big survey classes. But at another scale, certain groups and communities in particular are “disappeared.” The voices that are heard and the individuals who do show up in survey-level courses tend to be white, male, wealthy, powerful, abled, and recent. This is not a baseless claim; rather, it’s one that is now supported with empirical studies of textbooks and classroom practice.[1] In our increasingly diverse classrooms, the invisibility of individuals from other communities and identities is problematic.

The challenge we face is to find content and material for students that’s relatable, that they care about. Comics have that power—in particular comics about individuals, and especially comics about people with whom our students can identify. When we can show our students how those individuals are also tied up in webs of national and global history, we can help them to understand that they too are part of a wider world!

When I started working with the OER Project, I brought to the team the idea of representing the lives—and as much as possible the voices—of people from around the world and across history in a comic-style format. More than that, we wanted to make these representations not merely an add-on to the existing OER materials, but truly an integral part of the problems, evidence, and narratives in the course.

The idea was met with enthusiasm, and that kicked off the series of graphic biographies that are one of the hallmarks of the World History Project. Each of these graphic histories is the story of an individual caught in that web of patterns that is global history, but also affecting it. In a single comic-style page, we try to tell a story of experience and perspective that at the same time helps students to grasp, and sometimes to question, the broader patterns of continuity and change that make up the course. And, each is accompanied by a lesson plan and extended material for teachers.

A panel from “The Nobleman of Rao” – an attempt to give an entombed West African nobleman a voice.

I’m particularly proud of some of the graphic biographies the team has developed around Black individuals. The first of these appear at the very beginning of the course, with the Egyptian folktale of “The Eloquent Peasant,” the story of a farmer unsure whether the state is his friend or not. We move from folktale to archaeology in “The Nobleman of Rao,” a man whose remains tell us much about the rise of hierarchy and governance in the Senegambia region of West Africa. The other stories we tell are more derived from written sources. Domingos Álvares was a healer and community-builder caught in the Atlantic slave trade, who nevertheless practiced his skills among a diverse community in Brazil and later as a prisoner in Portugal. Yaa Asantewaa was a queen mother and anticolonial icon whose resistance to British colonialism was rooted in both tradition and innovation. Harriet Forten Purvis brought together feminism and abolitionism in nineteenth-century Pennsylvania, one of many unsung participants in a lives-long reform battle fought across continents. More well-known, Kwame Nkrumah is famous as the leader who brought Ghana to independence in 1957, first among the sub-Saharan African states. Nobody demonstrates the difficulty of navigating decolonization and the Cold War together as well as he does.

Nor do these individuals linger only in the past. Bringing the story to the present day in which we and our students live, we also tell the stories of Grace and Aminah, two modern-day Ugandan women who travelled to the United Arab Emirates for work. Their stories are part of an exploration of globalization. Potentially the most alienating of history narratives with its massive scale stories of commerce, diplomacy, and environmental change, globalization impacts every student in your classroom. By having students engage critically in  the stories of Grace and Aminah, among others, we give them insight into the human dimensions of this era of intense globalization, and invite them to bring their own stories into the mix as well.

A panel from “Ugandan Migrants,” which documents the experiences of two laborers on the move in search of work and economic prosperity.

Students are often deeply connected to these graphic biographies for the reasons I listed above. To get full benefit from them, however, requires that they develop somewhat different skills from reading text alone. Students can find the comics, and the lives they describe, to be rich sources when they learn how to decode them to discover the meaning the creators put into the art as well as the text. Equally important, they can learn to use the comics as evidence—at the smallest scale—to support, extend, or challenge the larger, global stories that make up the framework of a world history class.

Those skills are modeled and described in , which we made to help you prepare to teach students to do this kind of serious work with our graphic biographies. What I hope you will find in this video is a careful description of how comics can be used not only to give voice and presence to people who are otherwise often underrepresented in survey classes, but also to make those lives and voices meaningful for answering the big questions of history. For example, the Cold War is often presented as a struggle between the titanic American and Soviet states. Kwame Nkrumah’s graphic biography demonstrates how an African leader became an actor in pursuit of African independence in that conflict. Similarly, enslaved Africans are often depicted only as victims in the era of Atlantic slaving. Domingos Álvares’s story opens the question of how individuals could fight to define their lives and unite with others against that victimization.

Of course, we can’t just expect students to pick up on these cues themselves. That’s why we provide support with a reading approach, Three Close Reads for Graphic Biographies, which is offered alongside each graphic biography. You can find an introduction to this approach in Lesson 2.4 of the WHP Origins course, and Lesson 1.3 of the 1750 course. The Three Close Reads for Graphic Biographies takes students through three levels of questions. First, it asks them to comprehend the lives of the individuals being depicted. A second set of questions then asks them to analyze both the art and text of the graphic biographies to get messages and meanings about those lives and the experiences of the people they depict. A final set of questions guides students to apply these individual stories as evidence for critiquing and constructing global histories such as the advent of agriculture, the emergence of states, the impact of colonialism, or globalization. (Make sure to click View Lesson on each biography page to find these great questions!) 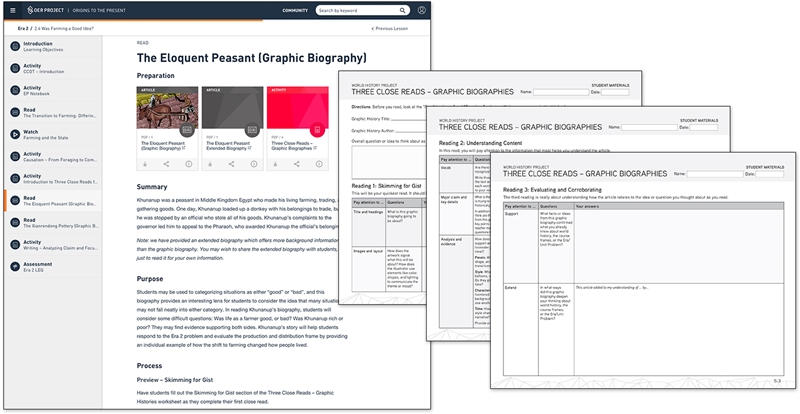 I hope your students will have an experience similar in some small way to what Congressman John Lewis hoped for when he produced March, in which he relates his experience of the Civil Rights struggle: to recognize the life of a person within the bigger trends of history, both as an actor and one being acted upon, but always as an individual deserving of dignity and history.