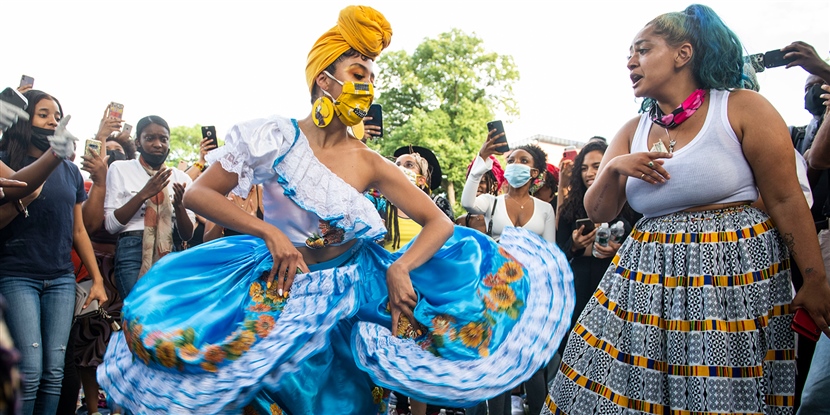 Each of the holidays we celebrate has its own history. Governments and other important institutions are responsible for the declaration of many of the holidays we celebrate—usually the ones where we get a day off from work or school. For example, we’ve looked at how the Presidents’ Day holiday was created by political leaders in the United States. Similarly, many holidays are proclaimed by religious organizations and supported by governments.

But some holidays are genuine expressions of celebration that bubble up “from below.” Often, these are not holidays for which we get a day off, but they’re still honored in households and communities. One of these holidays is Juneteenth.

Juneteenth began as a celebration of the ending of slavery. On June 19, 1865, Major General Gordon Granger issued General Order No. 3, declaring the freedom of enslaved people in Texas. Texas was the last state to enforce the emancipation of enslaved people—over two years after the end of the Civil War. Slaveholders in Texas had fiercely opposed the end of slavery and for two and a half years, they managed to limit the news of the Emancipation Proclamation that freed enslaved African Americans in the Confederacy. Granger’s declaration was met with shock and joy, as many communities of formerly enslaved African Americans erupted in celebrations across the state. 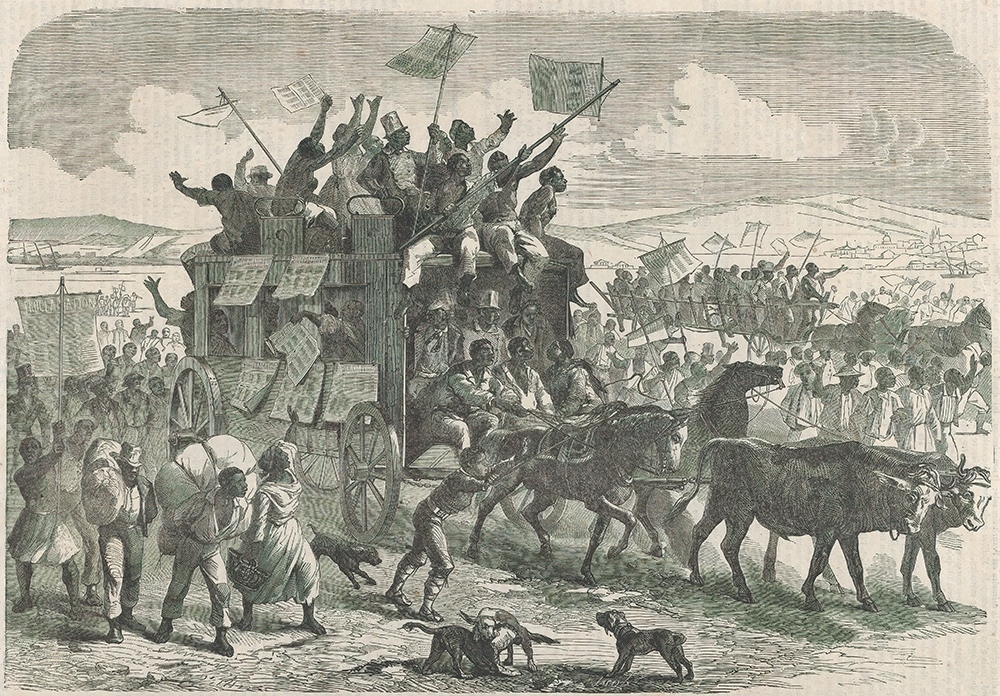 Formerly enslaved people spreading the news of emancipation, July 1865. While many slaveholders tried to keep the news from reaching their plantations, African Americans played a major role in publicizing both the Emancipation Proclamation and, later, General Order No.3. © Sepia Times / Universal / Getty Images

The story of the Juneteenth holiday might seem a small, local story, one limited to a single state in a single nation. But it wasn’t long before Juneteenth escaped the bounds of Texas. A year after Granger’s orders, formerly enslaved people across Texas gathered to celebrate their freedom. Soon, “Emancipation Day” was celebrated each year by African American communities across the US on June 19. In the years immediately after abolition, the celebrations involved mostly social activities, like singing and dancing and sporting events. But by the late nineteenth century, the meaning of the holiday shifted as Reconstruction ended and southern states began implementing racist Jim Crow laws. African Americans began marking the holiday with activism, demanding fundamental political and social rights in a country that continued to deny them.

Of course, Juneteenth celebrations and political activities met opposition from white supremacists, who began to portray Juneteenth celebrations as un-American. Governments and political leaders used these claims to justify new segregation laws. People who celebrated Juneteenth were often met with violence and terrorism from the Ku Klux Klan and others. Between 1910 and 1935, the celebration shifted again, becoming a private affair. This suppression of the celebration of Juneteenth continued for many years. Even renowned African American scholar Henry Lewis Gates Jr. reflects that he was not taught about Juneteenth in his Virginia high school and did not learn about it until he attended college. Only more recently has the holiday returned to being openly celebrated, a change that was bolstered first by the Civil Rights movement and, more recently, by the Black Lives Matter movement.

I also did not know about Juneteenth until recently. I’m a historian who was born in Ghana, and am currently a PhD history student at Yale University. (You may have met me in the video Resisting Colonialism: Through a Ghanaian Lens.) My country is deeply connected to the United States by history, including the forced migrations of the Atlantic slave trade. As a result, today there is quite a bit of intellectual and cultural connection between our two countries. For example, in Ghana there is a celebration called the Pan African Historical Theater Project, or PANAFEST, which was established to reconnect Africans on the continent with those of the diaspora. Through artistic performances, the project has aimed to forge unity among Africans across the world while pulling resources and minds together for the cause of Pan-Africanism and the development of the Black race. Since 1992, African Americans who have returned to live in Ghana have promoted a form of Juneteenth—an “American Emancipation Day”—to be celebrated in Ghana. Before this time, Ghana did not have any official event that celebrated or remembered the end of the slave trade or slavery. To be truthful, it still hasn’t entirely caught on. 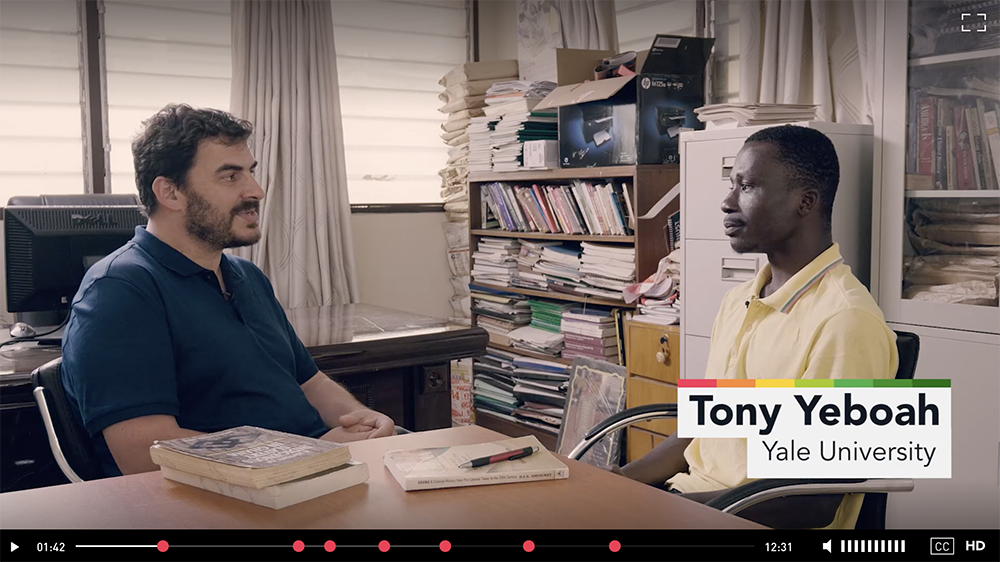 Tony Yeboah being interviewed by Trevor Getz in the video Resisting Colonialism: Through a Ghanaian Lens.

Yet when I return to Ghana, I have contemplated teaching about Juneteenth. It commemorates a very local historical moment, so why teach about it in a global context? Well, the event might be specific to Texas, but it also marks an important phase in the abolition of slavery in the Americas. You see, historians have tended to categorize histories into “small” and “big” narratives. The “big” histories are always about conquerors, masters, white colonialists who are presented as the drivers of transnational histories through their exploratory activities and imperialist ambitions. On the other hand, “small” histories are associated with the conquered, enslaved, minority groups who are imagined to be local and whose histories are bounded to a limited space. However, enslaved Africans in Texas and the reaction to their freedom defy this characterization. Through the unique story of remembering their enslavement and their freedom, waves of celebration have been inspired. These celebrations have grown and changed over time, but have by no means been limited to Texas—they’ve spread through the US and to other places around the world similarly marred by the history of enslavement.

Every history is important, and it is up to the historian to make connections and demonstrate why a “small” history is connected to, and as important as, the “big” histories. The same is true in your classroom. One of the strengths of the WHP/BHP approach is that students learn to use small bits of evidence—personalized graphic biographies and stories of individual scientists, for example—to challenge, support, and even build big global and even universal narratives. In this work, the “small” histories can be just as important as the “big” ones, even if we don’t get a day off for them.

Join the fun—hang out with us in the OER Project Community and share your own favorite lessons, books, and summertime albums!

About the author: Tony is a PhD student in History at Yale University. His dissertation examines the entangled themes of colonial power, the built environment, and community-making in one of the greatest West African capitals, Kumase. His works have appeared in the Journal of West African History, History in Africa, the Conversation, and Nursing Clio.